A heat wave blew right into town last week… and so our goal was to try and make napoleon slices (millefeuille in French) as fast as possible and then escape the warmth of the kitchen! Last week, we rolled out the last of the puff dough onto a sheet, docked it, and left it in the freezer. Chef baked it off before we came to class last night. We pressed down on the puff sheet to compress the layers, giving us a somewhat thin crisp layer of pastry. To make the pastry cream, we heated milk and butter to a boil, then slowly whisked in a mixture of sugar, cornstarch, eggs and vanilla. This thickened immediately and we spread it out on a piece of plastic so that it would cool quickly. I asked Chef why we didn't temper the egg mixture first, and she said the sugar prevents it from cooking the eggs too quickly. Our pastry cream ended up quite stiff, almost like scrambled eggs. 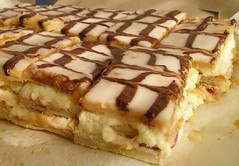 Next, while my partner whipped up a batch of cream, I melted some white fondant over a double boiler, thinning it with a bit of water. After cutting the puff sheet into thirds, we spread the icing on the nicest piece, followed by drizzling melted chocolate fondant on top. The cooled pastry cream was combined with the whipped cream, and then spread onto another piece of puff pastry, followed by sliced strawberries and a bit more cream. Another sheet of puff pastry went on top and it too was spread with pastry cream. When the fondant-topped piece was cool, we carefully sliced it into bars, then placed the pieces on top of the other stack before slicing through it completely. Our instructor suggested that we try a slice fresh, since they aren't the same the day after. I agree: after a night in the fridge, the pastry lost its crispness.

My gracious partner also made up a batch of chocolate sweet dough for next week. We're already at the halfway point, time to start thinking about which class to take next.

P.S. Chef made another questionable comment, this time about how she finds Asians usually don't like desserts that are too sweet. I almost made my own comment but I held my tongue.