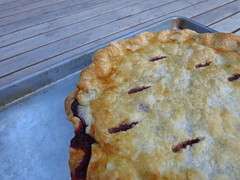 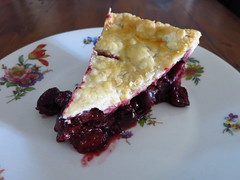 Perform an image search for cherry pie, and you'll most likely get pictures of desserts made with sour cherries. Cook's Illustrated published a pie recipe using sweet cherries a few years ago that I've always wanted to try, so this week, I bought a 3L basket of the season's last harvest and got to work.

The farmer from Sun-Ray Orchards (where I bought the cherries) told me that Bing cherries aren't widely planted in Ontario, and that the basket I bought were of the Hedelfingen cultivar. (Here is a detailed factsheet about cherry agriculture in Ontario. Did you know sweet and tart cherries can't pollinate each other? Or that farmers put beehives in their orchards?)

The recipe uses the now-standard vodka pie crust, so I made that first, and put the discs in the fridge. Next, I began the laborious process of washing, stemming and pitting 6 cups of cherries. Fortunately, we have a pitter that we had the foresight (or silliness) to include on our wedding registry. I missed the part about halving the cherries: don't skip this, as the cherries really don't break down much during baking. Puréeing some of the fruit with plums helps to balance out the sweetness as well as adding some liquid. And instead of pulverizing minute tapioca, I just used two scant tablespoons of tapioca flour. Because we're the kind of household that keeps tapioca flour around.

Once the filling was made, I poured it into the chilled dough bottom, and was very close to overflowing the crust. To be safe, I removed about a half cup of extra liquid, before sealing the pie with the top crust. I baked the pie for the minimum time, and not surprisingly, the dough on the bottom was a little raw.

I liked the flavour of this pie: sweet with a little tartness. The texture of the fruit was a bit firm, but I think that's highly dependent on the particular cherry you're using, as well as how small you cut the pieces. It's an interesting change from a sour cherry pie, but I think both have their merits.