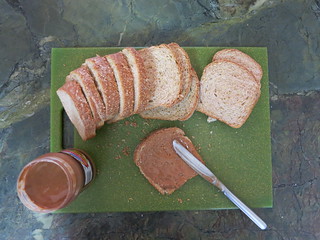 My son's breakfast is typically toast with peanut butter. He's been very consistent in his preferences. I like to bake bread, but we often just get loaves from the store. On Wednesday this week, I tried making the 100% whole wheat bread from Peter Reinhart's The Bread Baker's Apprentice.

There are three components to the recipe. I made the soaker using coarse ground cornmeal, and the poolish using regular, supermarket whole wheat flour. These are simple enough to whip up in the morning before work. In the evening after dinner, for the final dough, I included both optional ingredients, both the oil and the egg. The dough was quite wet and I needed about a half cup extra flour. I followed the proofing times exactly, as it was a warm night, and put the shaped loaves in two 8.5×4.5" pans. After 45 minutes of total baking, they were sufficiently browned and the internal temperature was well over 200°F.

This is probably the most delicious 100% whole wheat bread I've ever made. It's not as heavy and rich as the Cook's Illustrated loaf, and is surprisingly light. I like that I can vary the texture and taste by changing what grain(s) to use in the soaker. Highly recommended, and simple enough to make in one day.