My brother-in-law, who is staying with us for a while, really, really wanted banana bread. I happened to be cooking out of one of Ottolenghi’s savory cookbooks, when I saw this recipe in the last chapter.

The recipe comes from Plenty More by Yotam Ottolenghi. Like many other vegetarians (and meatatarians alike), my wife and I have become devoted fans, cooking and serving recipes from his four cookbooks. Although Ottolenghi got his start as a pastry chef, I’ve never really thought much of the sweets he’s included in the books.

This banana bread starts off with a simple quick bread, loaded with 2 cups of toasted pecans. Compared to other banana breads, in my humble opinion, it’s a little too dense, and a little too mild in flavour. However, the recipe doesn’t stop there. It continues with the instruction to spread thick slices generously with butter. 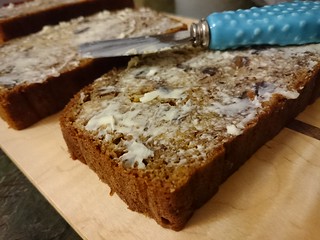 These went into the toaster oven to brown a bit (despite the recipe including the word “grilled”, I would describe this as “broiled” or “toasted”). When the slices come out, I drizzled them with tahini. 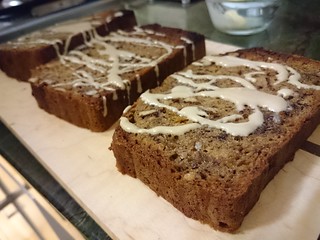 The final step is to lay a piece of honeycomb on top, and sprinkle the whole plate with a little sea salt. (Amusing story: my wife went to Longo’s for groceries, and the employee she talked to kept insisting she meant the cereal. When she told them she meant what honeybees produce, she said “Oh, no one’s ever asked for that before.”) 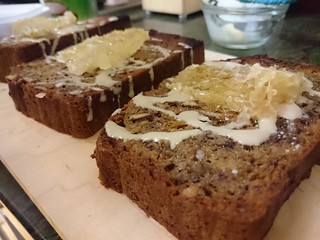 Mmmmm. That’s all we had to say as we ate this after the kids went to bed. The tahini and honeycomb really elevate a mediocre banana bread into something much more delicious. 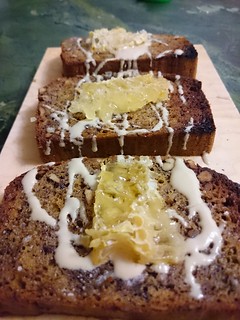