My father’s birthday falls around Thanksgiving, so as part of our dessert table over the Canadian holiday, I wanted to make him something he would like. Since he loves nuts (of all kinds), I made this stunning tart which would have several kinds of nuts in each forkful. 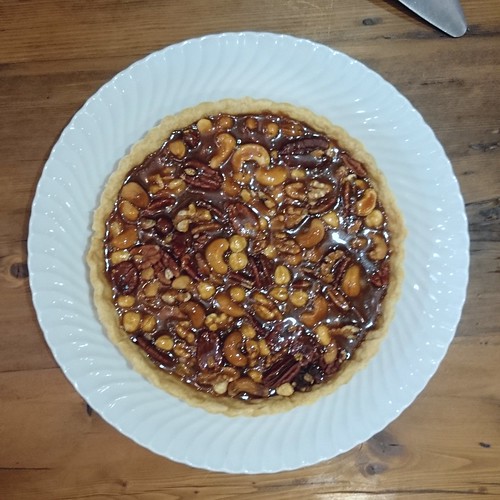 The crust of the tart is made with pâte brisée, the classic French tart pastry. I was pleased to see that the book’s recipe follows the same technique that was used in Cook’s Illustrated’s celebrated “vodka pie crust” and The Food Lab’s Easy Pie Dough. That is, all the fat is cut into part of the flour, and then the rest of the flour and ice water is mixed in afterwards. This guarantees a flaky result. Making a blind-baked crust is time-consuming, since you need to make the dough, chill it, roll it out, chill it again, then bake it, first lined with pie weights, then without. 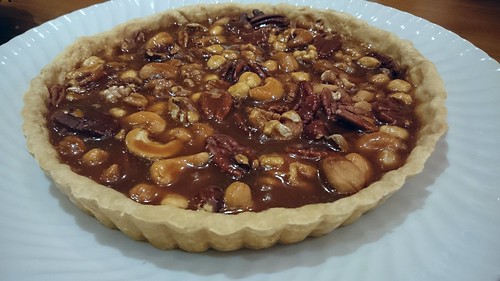 Making the caramel jam was considerably easier, and something I started a few hours before dinner began. First, I heated the glucose, and then stirred in a bit of sugar at a time. Once the target temperature was reached, I added the butter and cream, heating it again until the mixture was smooth and at the desired temperature. My caramel ended up quite a bit darker than the one in the book’s photograph, but didn’t taste overly bitter.

This tart was extremely well received. The crunch and flavour of the toasted nuts was a great match to the creamy, slightly bitter caramel. Each slice was clean, and the caramel stayed firm. Highly recommended.