Most sweet recipes for rhubarb usually pair the stalks with strawberry, so it’s noteworthy to me when I see a recipe using the plant on its own. As you would expect from the Bouchon Bakery book, this tart wasn’t simple but, boy, did it deliver on taste. 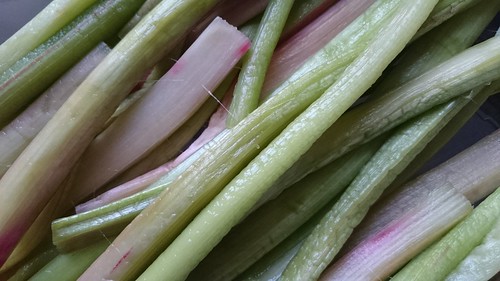 The first step in the recipe was to prepare the cured rhubarb. The peeled stalks need to be macerated in a syrup made with grenadine (which I naively tried to find at the liquor store). This is supposed to colour it somewhat, but the bright green stalks I used remained bright green after the curing process. The only place I’ve seen the more tender, thinner, and redder stalks, are at farmer’s markets. Also, the recipe calls for two pounds of rhubarb, this is about double what you actually need for one tart. 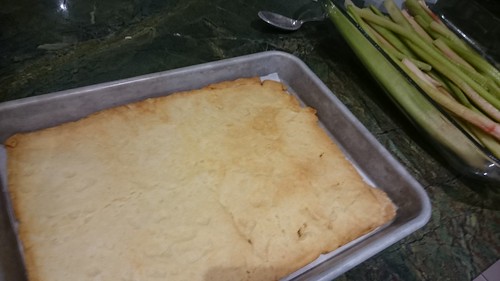 The base of the tart is actually a crisp, blind baked pâte sucrée. Bouchon’s version uses vanilla bean seeds as well as almond flour. Note that the recipe in the book makes enough for two rhubarb tarts, i.e. you’ll only need one of the 4”⨉6” dough blocks. The shell shrunk quite a bit during baking, so make sure to overfill the base slightly when you roll it out. 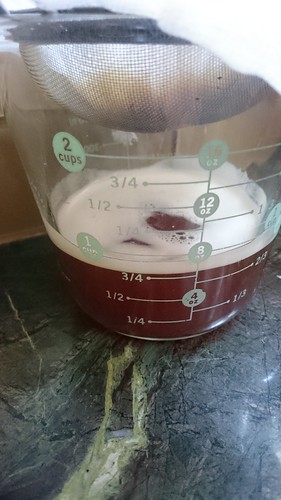 To make the filling, you need to make brown butter. I found it easiest to measure the amount I needed by straining it through a small piece of cheesecloth, set in a strainer, over a glass measuring cup. 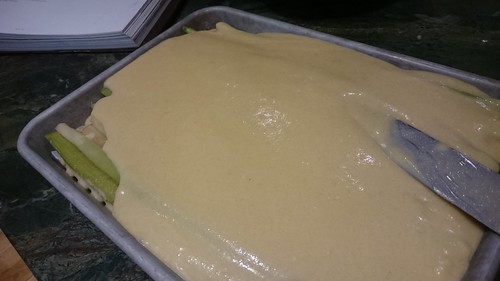 The filling is easy to put together, but just be sure your eggs and dairy ingredients are at room temperature, to ensure the melted brown butter doesn’t solidify. I didn’t bother with putting the filling into a piping bag, it’s easier to just pour it over the rhubarb and spread it with an offset spatula. 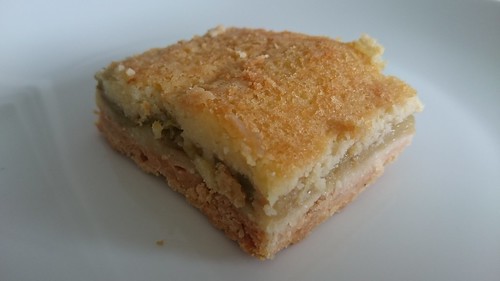 After a long bake, sufficient to brown the top, you cut the tart into small rectangles. You’re also supposed to garnish it with a streusel and powdered sugar, but that seemed like too much. This rhubarb tart is phenomenal on its own. The buttery and nutty filling is a great complement to the tart and soft rhubarb, and the sturdy crust holds it all together. The only thing I would change is to underbake the base in the future, as I didn’t like the cracker-like consistency it developed.