After returning from our cottage vacation in July, I really hoped that local sweet cherries would still be available. The farmer’s markets didn’t have any, but the supermarket still did, so I bought five pounds worth, with the intention of preserving them in liquor.

The recipe comes from The Bar Book, a recent purchase to raise my mixology mastery. It’s a technique-focused book, but there are lots of interesting recipes in it. When I saw the brandied cherries recipe, I promised myself that I would make it when we were back home. The first step for us was to buy a cherry pitter, since our last one broke, and to buy the two other items we didn’t have in our pantry: juniper berries and brandy.

Because Dr. S isn’t a fan of allspice, star anise nor cinnamon, my compromise was to use half the quantities of these spices. I definitely wanted to include them, though, as I liked the idea of subtle, warm, hard-to-identify flavours in the finished cherries. Our cherries were a bit on the small side, but they were relatively firm, and easy (though tedious) to pit. 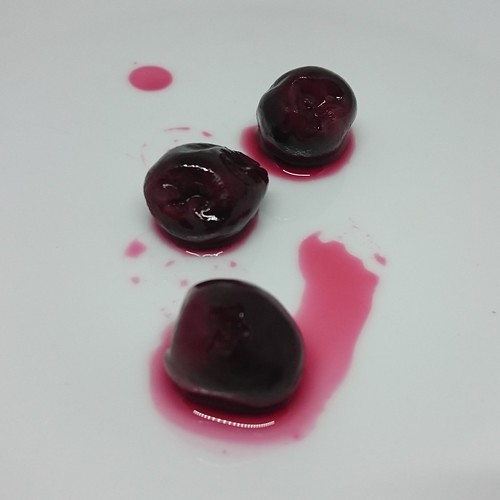 I experienced syphoning for the first time while canning these cherries: the syrup from the jars leaked out after I removed them from the hot water. To avoid the risk of spoilage, the next day, I pried open the lids, and re-processed the contents. This time, I made sure to leave a full ½” of headroom, and to take out the jars promptly. 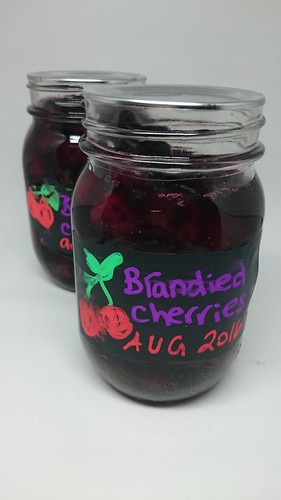 Cherries are a garnish in a number of classic cocktails, and I look forward to enjoying them in a drink, as well as in applications like Black Forest Cake and other desserts. We also saved all of the leftover syrup, as a tablespoon mixed with sparkling water on ice is dynamite.