Most of the sourdough breads in the Bouchon Bakery book use a small quantity of liquid levain, but this recipe calls for a significant amount. This resulted in a loaf with an unmistakable flavour. Read on to find out why the first loaf was a disaster, and how I learned from my mistakes to make a great second bread.

The starter I’ve been maintaining is very active, waking up and bubbling vigorously on every feeding. I fed it before going on vacation, and left it in the fridge untouched for a few weeks. At any given time, I have 650 g of starter (150g saved from the previous levain, plus 250g each of water and flour). This loaf calls for 400 g of starter (~100% of flour weight) which means you don’t need to toss away very much when refreshing it.

Until this week, I haven’t really been motivated to make this bread, because it requires at least 7 hours from start to finish. My schedule on Saturday was: 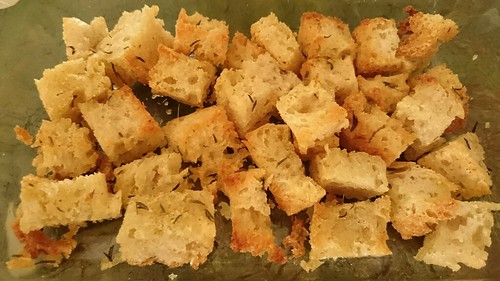 First off, this first loaf was disastrous: flat, chewy and barely coloured. Here are the mistakes I think I made:

To make the best of this situation, I cut off the chewy and hard crust, then cut the interior into cubes, tossing them olive oil, herbs and salt, then baked them until golden. Sourdough crotons! 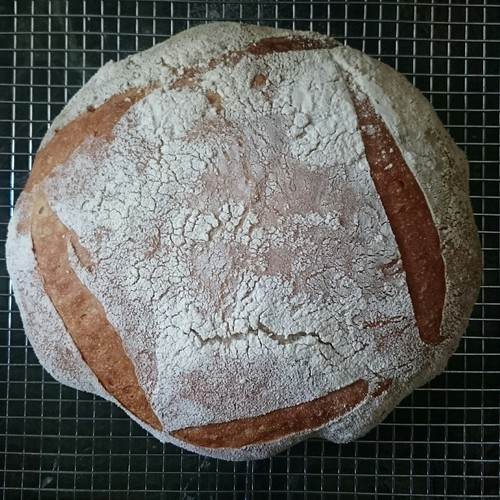 Above is the second loaf. Much better! The difference? This time, I used a bit of additional flour and yeast, so the dough would hold its shape better. I also proofed it in smaller bowl, lining it with linen this time. And I also baked it at the proper temperature. 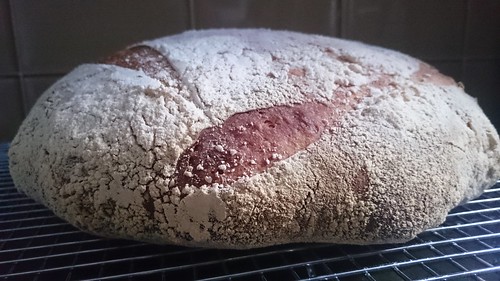 I don’t have an interior crumb shot, but you can see this loaf is relatively tall for a high hydration dough. This second loaf turned out really nicely, with a decent sourdough flavour. The crumb is a bit tight, and doesn’t have very big holes.