I added this pie recipe to my “food projects to try” list last month. It had so many interesting ideas: warm spices, clementine zest and lots of vanilla in the filling, and rye flour in the pastry dough. Looking for a break from apples, I was excited to make this pear-cranberry dessert.

The recipe was published in the Globe and Mail, and is by Tara O’Brady. First up was making the pie dough, which included a large amount of low-gluten rye flour. The mixture definitely felt crumbly, even after my kids and I squashed the butter cubes with our fingers, and incorporated all of the liquid. Rolling it out was problematic: the dough didn’t hold together very well, and cracked quite a bit. It was quite soft though, and easy to patch together after I transferred it into a glass pie plate. 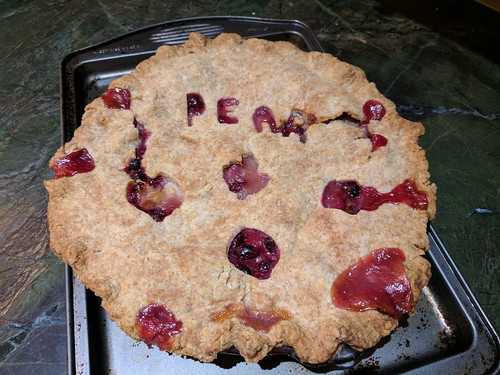 As for the filling, my pears were really ripe, and released a lot of liquid during their maceration with the citrus juice and sugar. I cooked down the syrup for longer than the specified 5 minutes, so that it thickened considerably, before cooking the cranberries in it. Once combined with the pears, which had turned quite soft, the whole mess looked a lot like a stew. 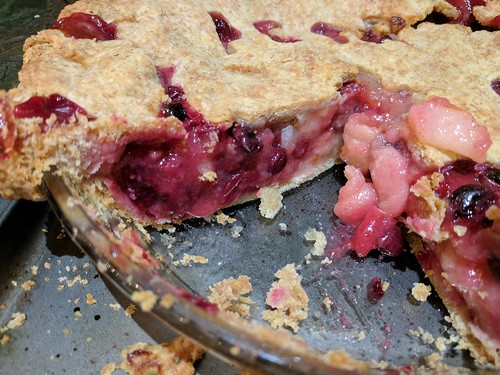 After a long bake, the final result was an intense and aromatic pie, with a tender, short crust. I personally love pears, and the flavorings in this recipe (ginger, cardamom, orange, vanilla) contributed to a more complex taste. The weakness, in my opinion, was the rye crust: it ended up tasting like a cracker, and was finicky to work with.