Valentine’s Day is also known as “House-i-versary” for us, the day we moved into our home. We don’t usually go out or get each other anything, but looking back at what I’ve made in previous years, it’s clear that something chocolatey was needed. These Reese’s peanut butter cup knock-offs contain just two ingredients, and were easy enough to make on a weeknight after dinner. 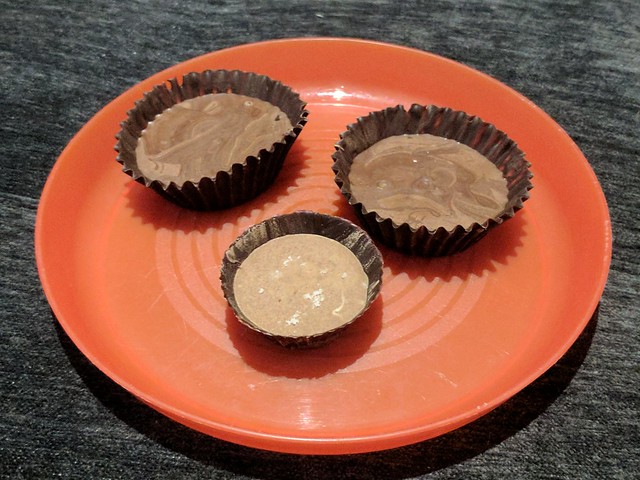 The recipe comes from Michael Recchiuti and Fran Gage’s book, Chocolate Obsession. After tempering some dark chocolate, you paint that onto the inside of several silicone muffin liners. If you’re using paper, you double them up, so the mold is more rigid. I used a mix of both mini and small liners. Do ensure that you build up a nice thick layer, especially near the top. 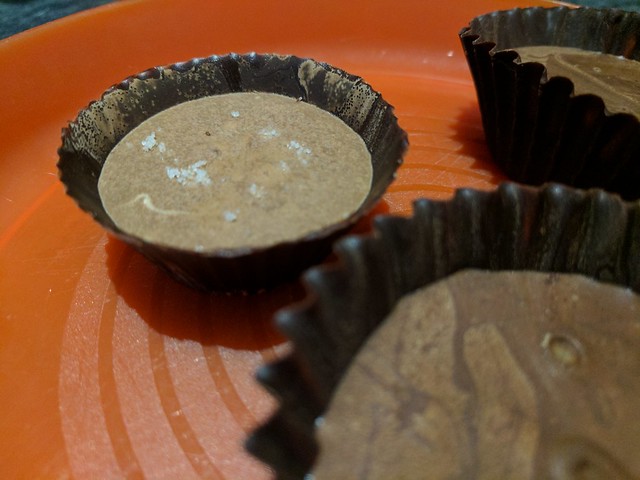 Once the liners are made and set, you combine melted chocolate with peanut butter (roughly 50:50), stirring until the mixture is smooth and cool enough that it won’t melt the molds when they’re filled. Then, the pucks go in the fridge until the filling is firm. You can optionally sprinkle some fleur de sel on top.

I think how much you like these depends a lot on the kind of peanut butter and chocolate you use. With a 70% cocoa chocolate, and a natural peanut butter, the overall flavour was harsh, with strong bittersweet notes. With a “regular” peanut butter and milk chocolate (as called for in the recipe), these would more closely approximate the commercial candy flavour.