My favourite breakfast cereal growing up was Quaker Harvest Crunch. Over time, I stopped buying the bright orange box as I realized the cereal wasn’t that healthy, with its relatively high fat and sugar content. This week, while flipping through a cookbook, I became excited by the idea of making a batch of similar-tasting granola. 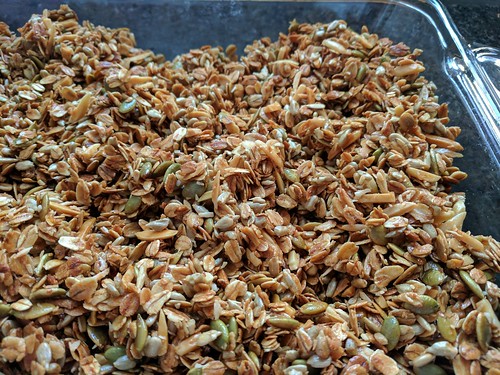 The recipe comes from Baking Chez Moi. I actually came across it while skimming the headnote for a roasted rhubarb recipe, which I ended up not making, opting to wash, peel, cut and freeze the tart stalks instead. However, I really liked the suggestion of making yogurt parfaits, with granola and cooked fruit as layers. 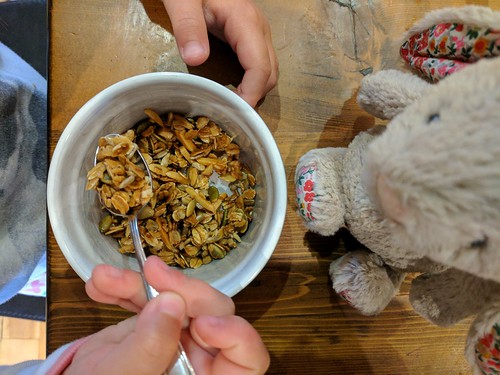 Aside from buying all the ingredients, making this recipe was a breeze. After the sticky mixture is made, you dump it into two (ungreased) Pyrex dishes, and bake for 45 to 60 minutes. After the first twenty minutes, the granola hadn’t taken on much colour. But at the 40 minute mark, the clusters had started to brown, and I made to sure to thoroughly stir the mixture, after adding the coconut. I wanted a deep golden brown, so I left the dishes in for another 15 minutes. 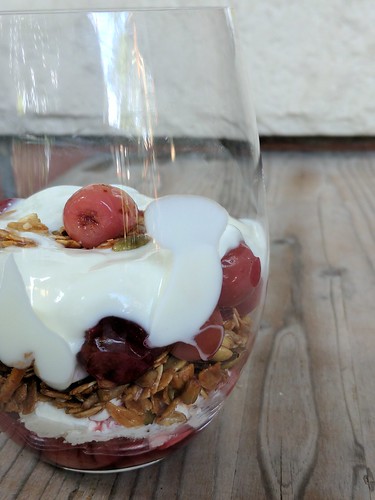 In its molten state right out of the oven, the granola was somewhat fluid, but after cooling overnight, it became brittle and crunchy. I opted not to add any dried fruit so that eaters could toss in whatever mix-ins they wanted. Pictured above, are some breakfast parfaits, made with wine-poached cherries (from our weekend fruit-picking) and Greek yogurt. The granola is just a tad too sweet, but I love all the nutty and seedy flavours.