People like to name things after other things that have the same shape, e.g. U-turn, grape tomato, dogleg golf hole. I’ve never seen the appeal of a doughnut or Saturn peach, a flat, round variety that has less flesh and juice than regular yellow or white peaches. Still, I decided to give them a shot this weekend, recalling a picture in one of my cookbooks.

The recipe I was thinking of comes from Sherry Yard’s, Desserts by the Yard. It highlights the shape of the flat stone fruit by turning it into something resembling a real doughnut. Before macerating the peaches in a lemon-scented syrup, I tried to peel them by blanching in boiling water. However, the thick skins stubbornly stayed on, so I pulled them off as best as I could. Here’s the flat fruit after sitting in the syrup all day:

Instead of making a batch of anise biscotti, I took some leftover pistachio biscotti I had in the freezer, toasted it to dry it out, then blitzed it with more pistachios and a good pinch of aniseed. Making the coating for these peaches is just like making battered fish: dip the pieces in flour, then egg, then the crumbs. 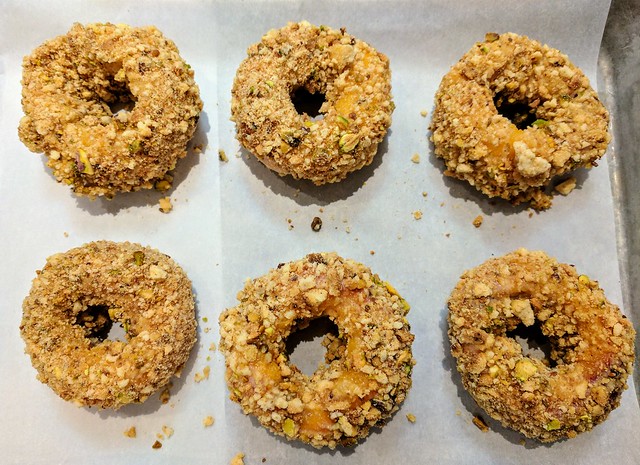 Don’t they look like real doughnuts?! I baked them in a moderate oven for the full baking time (15 + 10 minutes) as the peaches still felt firm and I wanted the nuts and crumbs to get really brown. 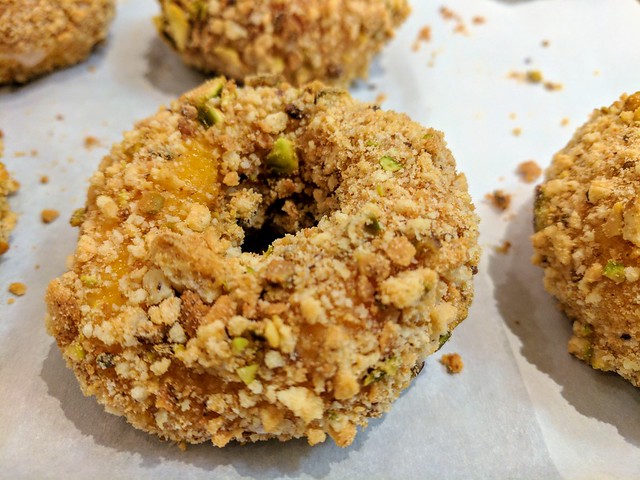 The outer crust doesn’t get very crispy, nor did the peaches get meltingly tender, but there’s a definite contrast between the nutty crumbs and the cooked fruit. 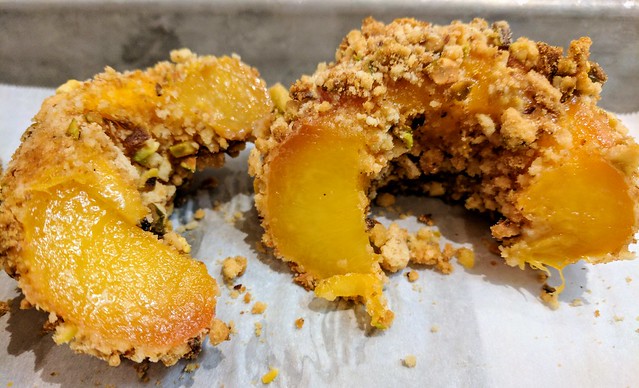 I enjoyed this whimsical dessert, how it emphasizes the fruit, so you don’t feel bad for eating more than one at a time. Obviously, if you don’t like anise, you could swap in a different spice. And you could easily adapt the recipe to regular peaches cut in thick slices, or with other dry, cookie crumbs also.