Seeing combinations of flavours that I haven’t tried before gets me really excited. This chocolate-sesame brownie certainly made my tastebuds tingle, and was exactly the kind of dessert I knew I could expect from the new dessert book from Yotam Ottolenghi.

The recipe is from Sweet. It’s similar to most other brownie recipes in directing you to melt chocolate and butter together, whipping eggs and sugar to a light foam, then combining everything together with the dry ingredients. 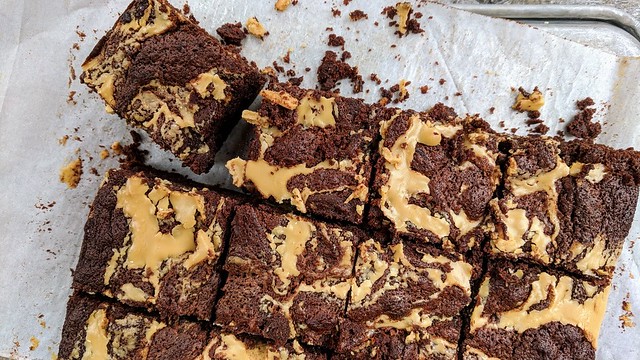 Where it deviates from the norm, is in adding chunks of halvah to the batter, as well as drizzling tahini on the surface. I used a plain sesame halvah bought at a Middle Eastern grocer (Marché Adonis, for those of you in the Greater Toronto or Montréal areas). The ground sesame paste on top surprised me: the oil was absorbed into the batter, and left behind a firm nut paste, not at all runny. I baked these brownies in an 8” brownie pan, and needed 27 minutes before a toothpick inserted in the centre wasn’t wet. 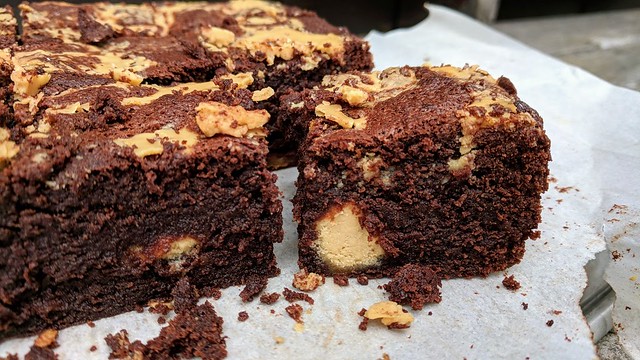 More than one person commented that the brownies had a peanut smell when they came out of the oven. I did cut back on the sugar somewhat, but these still tasted rich to me, full of deep chocolate flavour and the occasional bite of crumbly sesame candy. Next time, I would experiment with slightly shorter baking time, and aiming for a less cakey texture.