I was delighted to find a fruitcake recipe in my newest cookbook. It’s something I actually enjoy eating, and it’s one of those cakes that has as many variations as there are bakers. This version follows the current trend of eschewing artificially coloured fruit (green cherries!) in favour of natural ingredients, and makes a pretty good Christmas cake.

Ottolenghi and Goh (the book authors) discuss their fruitcake here. There are a few things in the ingredients I want to highlight: quatre épices, a blend of white peppercorn, cloves, nutmeg, and ginger; orange marmalade without the peel, which, of course, I ignored, as I love the bitter zest; and no nuts, which I ignored also, since pecans are the best part. 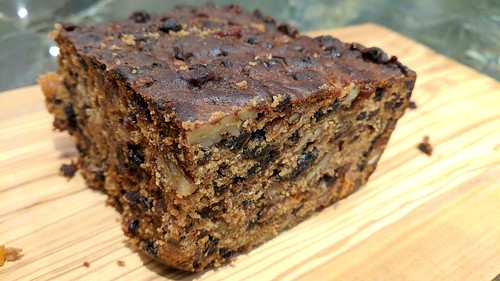 The recipe has two parts: soaking the alcohol and dried fruit, and the actual creation of the batter and baking it. For the fruit mixture, I subbed in my brandied cherries for the glacé ones, and poured in some of the syrup also. I didn’t think there was quite enough brandy and rum so I was generous with the quantities. 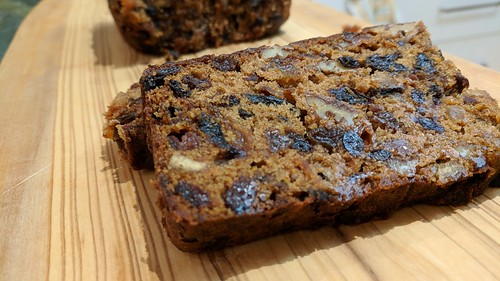 I used an 8” round cake pan (3” high) to bake this. It was fully baked at the minimum time, and didn’t brown too much on the surface. The recipe suggests a marzipan icing, which I personally don’t think is needed, but I do like the idea and look of the torched topping in the book. Maybe next time. Sliced thinly, and enjoyed with a mug of hot tea, this is a Christmas cake that is familiar and satisfying.