Cider is the grown-up version of apple juice. I like it in its pure, unadulterated, cold-pressed form, or in its boozy, hard rendition. So when I came across this Cook’s Illustrated cake calling for one quart of cider, I was intrigued. How was this much liquid going to get incorporated? 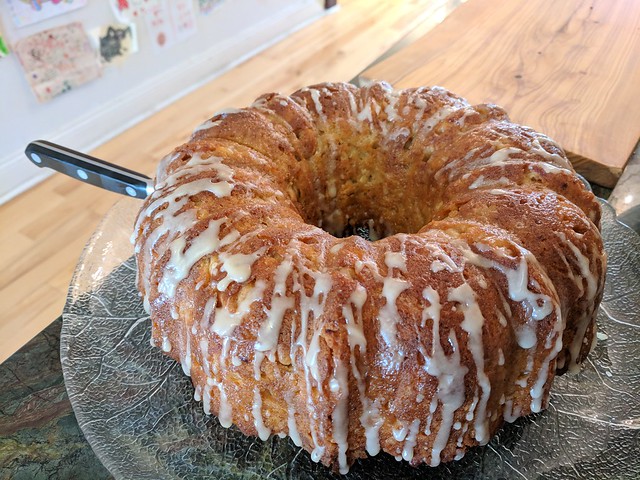 It turns out the recipe uses two key ideas for making the most apple-y cake ever. First, cider isn’t concentrated enough to impart enough flavour, so you boil it down into a syrup. (If you happen to live in the New England, USA area, you might be lucky enough to find ready-to-use boiled cider in farm stores.) Second, apple chunks leave pockets of moist pockets in the dough, so it’s better to grate the apples to impart both moisture and flavour more evenly. 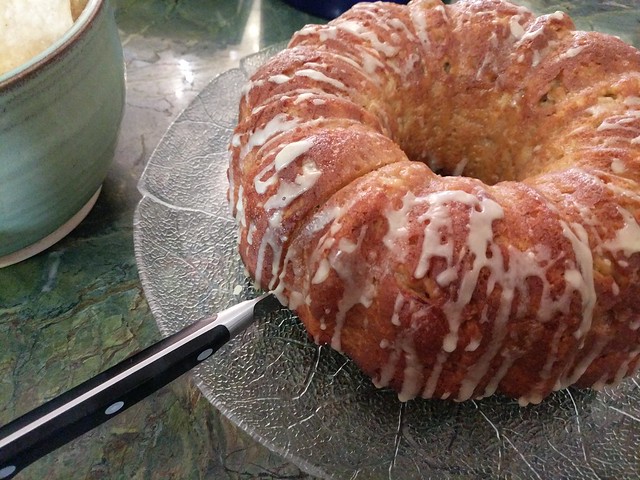 Finally, after the cake is baked, there’s a final one-two finish to drive home the point that this is an apple cake: an all-over brushing with boiled cider, followed by a glaze made from icing sugar and, you guessed it, more of that sweet apple syrup.

I thought this cake was fantastic. I made it on a Friday, then left it under a cake dome at room temperature until our party on Sunday. The glaze had dissolved into the cake a bit, making the outside a bit gooey. Every bite was full of apple flavour, with a pleasing tartness, rather than the cloying flavour of some apple coffee cakes with their sugary streusel. Even after a few more days under the dome, pieces of the sliced cake stayed moist. Highly recommended.