My parents gifted me a cookbook a few years ago, and it beautifully captures the essence of a bakery in Edmonton, where my aunt lives. I finally made one of the more elaborate, multi-step, multi-flavour desserts from the book, and it was so worth it.

The recipe is from Duchess Bake Shop, the cookbook of a celebrated bakery in Edmonton, AB. The author has French-Canadian roots, and Montréal is a large city in the province of Québec, a major producer of maple syrup in the country. 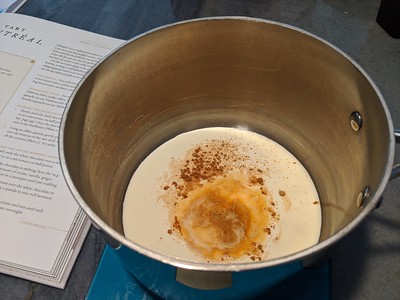 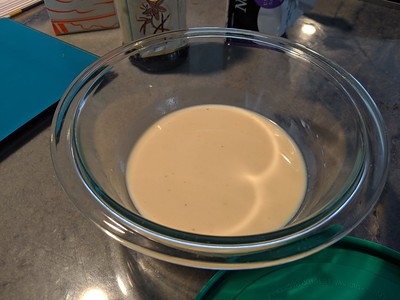 I started with this component first, because it needs an overnight chill. The spicing is pretty mild, just a pinch of ginger and cinnamon. There is much more cream than white chocolate, so the ganache will not set firmly. 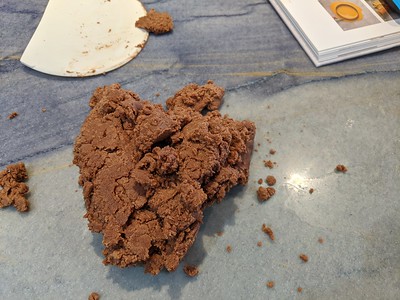 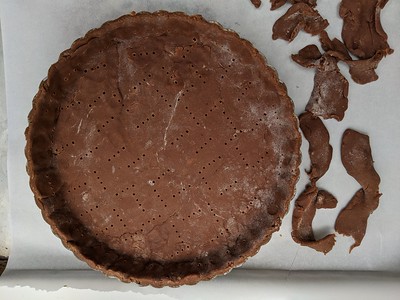 I’ve made tart dough countless times, but I’m still not great at it. This dough is quite buttery, and you can’t skimp on any refrigeration time. I had a lot of cracking after I transferred the dough to my tart ring, but it’s so soft that there’s no trouble patching it. Make sure to dock it well, to avoid having to pop any giant air pockets mid-bake.

Notice I rolled the dough too thin and had leftover scraps. I baked these off anyways, and the kids enjoyed the slightly burnt, chocolatey crisps. 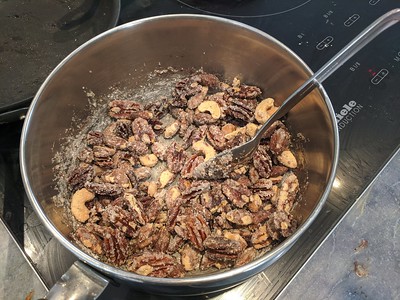 While the tart shell was chilling, I worked on the garnishes. These nuts are caramelized in two steps. First, the sugar syrup is cooked to the soft-ball stage (about 240℉) and the warmed nuts are stirred into it. As they cool, they get an even coating of white sugar. 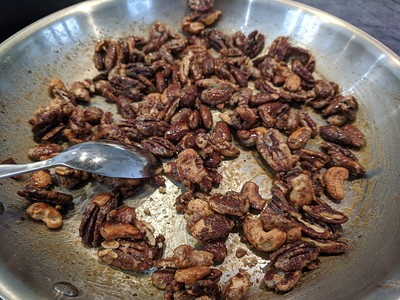 Then, in a clean saucepan, you slowly melt the coating on the sugared nuts. This took some time, and melted faster when I turned up the temperature. 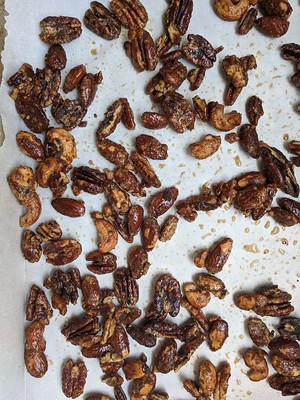 Finally, the spices and cocoa butter are stirred in to coat them in the flavouring and keep the nuts separate. The book mentions that regular butter is okay, but reduces the shelf life. This is a good tip to file away. 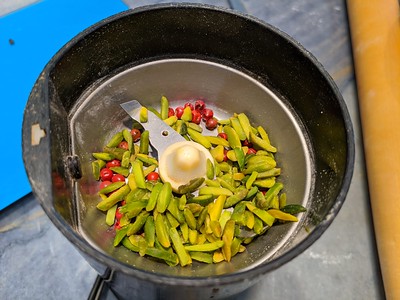 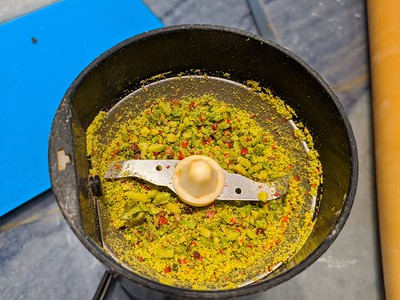 There’s not much of a recipe here, just melting chocolate, spreading it thin, then sprinkling toppings on. For a colour contrast, I used slivered pistachios and pink peppercorns, briefly pulsed in a spice grinder. 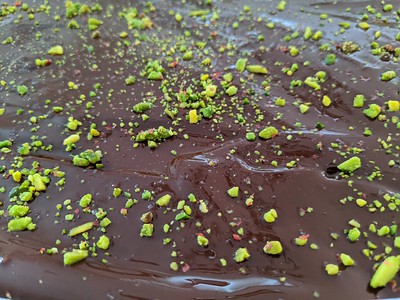 I was lazy and didn’t bother tempering the chocolate. In addition to the pulverized ingredients, I turned a few twists of pink Himalayan salt onto the chocolate too. Since it won’t dissolve, the finished bark actually sparkled! 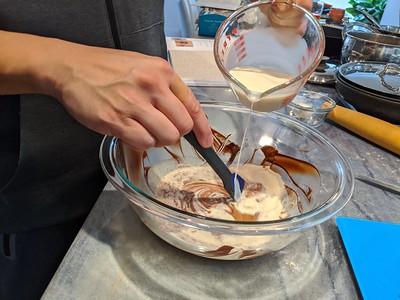 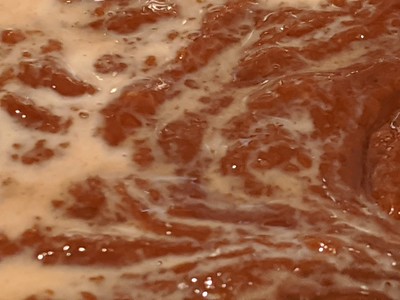 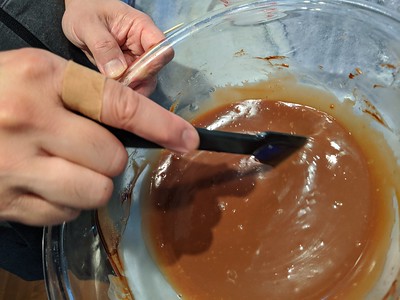 I made this after the baked crust had cooled, as it needs to be pourable. 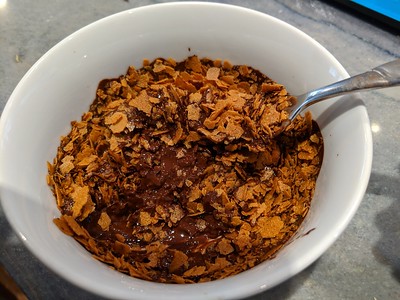 I absolutely love any excuse to use feuilletine. Stirring it into pure chocolate allows its crunch to be preserved. Definitely don’t mix it into ganache, where the moisture will immediately soften the wafers. 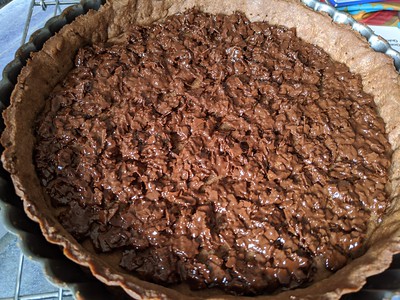 Once the tart shell was blind-baked and cooled, I was able to spread the base into the bottom. 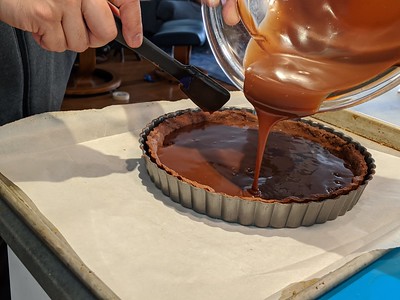 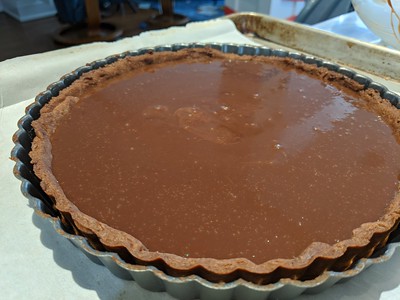 There is just enough maple bourbon ganache to fill an 8” tart shell. It needs a couple of hours to set up in the fridge. 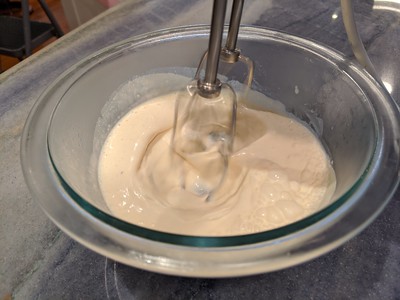 The white chocolate ganache stays fluid even after an eight-hour refrigeration, but whips up into nice soft peaks that can be piped. 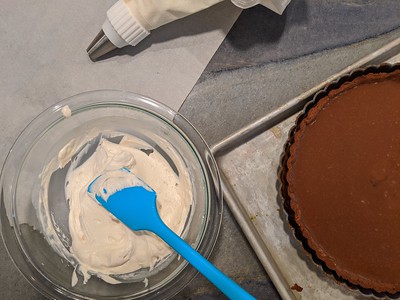 Once the base is made, you get to exercise some creativity! First, piping the white ganache into random sized dots with a plain tip. 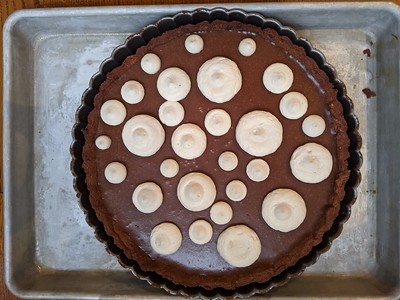 The chocolate bark did not snap into shards cleanly, as my chocolate wasn’t tempered. Since the pieces are so thin, I didn’t want to handle them with bare hands, lest they melt. 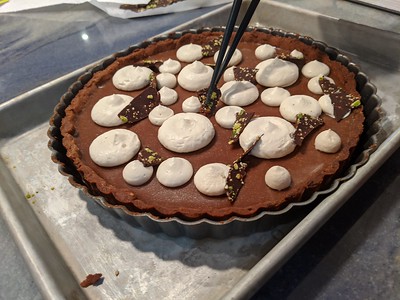 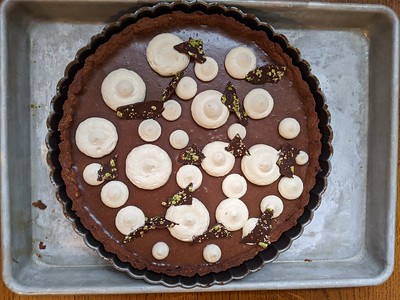 Lastly, a sprinkle of chopped, spiced nuts, and a few flakes of feuilletine: 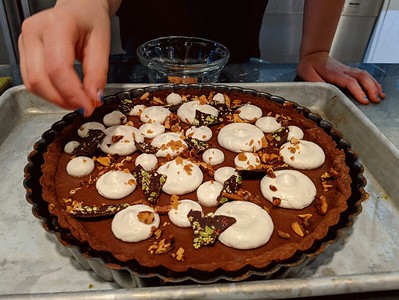 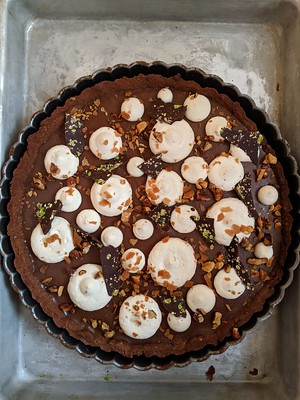 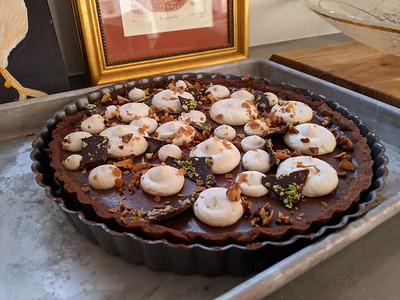 As for the taste? Every forkful had delicious contrasts: maple bourbon combined with warm spices, two textures of ganache, crispy wafers and crunchy nuts, salt and pepper in the garnish… a masterpiece. One big criticism I had was that my tart shell was too hard, I must have worked and rolled it too much. This made slicing and even eating a little awkward.

From Duchess’ website, I saw that they have changed this tart up a bit, and now feature tiny piped dots of a tart apricot gel on top!