Earlier this spring, my daughter picked out a chocolate mint plant from Sheridan Nurseries. It’s grown quite bushy over the summer in its large pot on our deck, and we decided to use up some of it this week. Sadly, infusing it in cream did not bring out a lot of its flavour. The ice cream was still delicious though, especially the interesting technique of incorporating chocolate.

Max Falkowitz provides the recipe in Serious Eats. As I mentioned in the intro, the fresh chocolate mint we used did not produce a “minty” flavour in the custard. I think that’s common to many of the non-peppermint varieties. We ended up adding a half teaspoon of peppermint extract to the chilled base to correct the flavour. 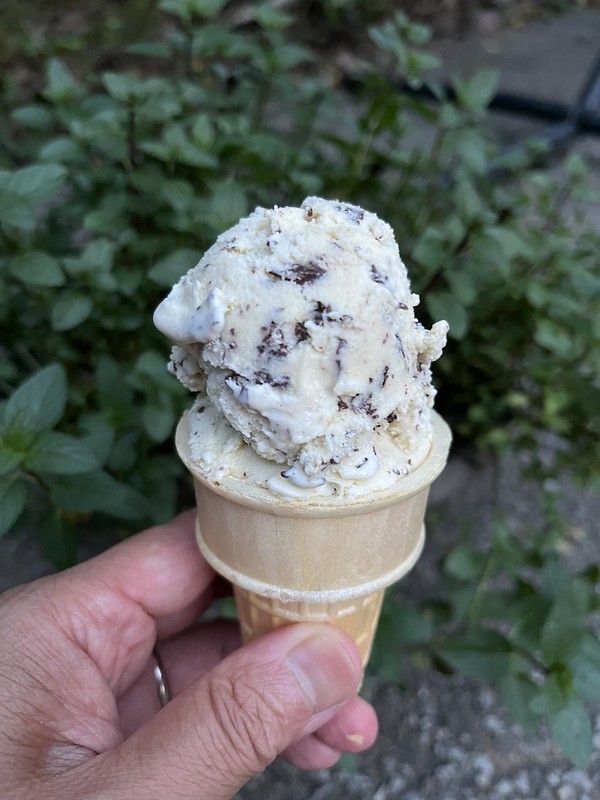 The most intriguing thing about the recipe is how it doesn’t actually include chocolate chips. Instead, it uses the stracciatella technique of drizzling melted chocolate into the still-churning ice cream. And, to make the shards and ribbons of chocolate melt more easily in the mouth, a tiny bit of vegetable oil is added, to lower the chocolate’s melting point.

Were all these extra steps worth it? Absolutely. This was a mint-chocolate ice cream (without any added green colouring!) with a pure, clean flavour that everyone enjoyed.