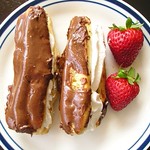 We started this morning by making pâte à choux. Water and shortening is put into a pot, and brought to a rolling boil. Then we dump in sifted flour and stir until the flour has absorbed all the water and has gelatinized. It's done when it clears the side of the pot. To avoid a messy cleanup later, the empty pot should be filled with hot water. The choux paste is put into the bowl of a mixer and is worked until the bowl is cool enough to touch; you don't want the eggs to cook! Adding them two at a time, we made sure the eggs were well incorporated, scraping down the bowl towards the end. Using a large star tip, we piped out ladyfingers (for the éclairs) and rosettes (for the cream puffs). Our instructor advised us to make the shapes as uniform as possible and not too thick so that they would cook evenly and thoroughly. more… 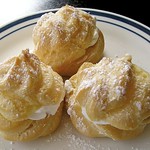 After they were baked and cooled, we dipped the tops of the éclairs in chocolate fondant which Chef had made during the break. I noticed that the tops of the ladyfingers were uneven from the grooves made by the star tip making it hard to get a nice coating. Perhaps a plain tip would be more suitable. While the fondant was drying, we sliced the top thirds off the cream puffs and piped whipped cream into them. The éclairs were similarly split and filled. Chef showed how to make swans using choux paste that he had piped into shells and swan necks. He filled the bottom half with cream making the body. The top was cut in half lengthwise and the halves inserted into the cream, forming the wings. The thin swan necks were inserted to complete the swan.
Our pâte à choux creations were neutral in taste since they were made with shortening and no sugar. I suppose this is to accomodate whatever filling you want since small savoury puffs can be used for canapés. According to Dufflet, profiteroles derive from a French word meaning a small gift. A better explanation is due to Sherry Yard, who says that they cost little to make but yield high margins!