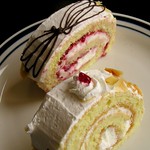 The last class of the course featured Swiss rolls (also called jelly rolls) which are a thin layer of sponge cake spread with a filling and rolled into a cylinder. We immersed 16 eggs in warm water briefly to get them up to room temperature. Chef gave us a tip that vinegar helps to whip eggs into greater volume: I read that the acid helps the egg whites to bind together and prevent water from separating out. The eggs were whisked at high speed along with sugar, salt, vanilla and lemon flavouring. After a while, the eggs took on a pale yellow colour and expanded in volume. My partner folded in bread flour by hand and we spread the batter onto two sheet pans. The sponge sheets were baked immediately to avoid any collapse of the batter. It's a good idea to preheat your oven to ensure that it's ready to go when you are.

When they were cool, we sliced each sheet into two and spread them with two fillings, lemon and raspberry jam, followed by a layer of whipped topping and cream. After carefully rolling the sheets up, we masked the tops, smoothing them with a piece of parchment. The sides were decorated with toasted sliced almonds and we piped various decorations with chocolate, raspberry jam and cream.

So that was it, my first baking course. It was a great experience, even though I had reservations about the emphasis on commercial preparation. As a co-worker pointed out, I now know how to make a variety of different items that I hadn't baked before. On to the more advanced courses!

Update: the Basic class has now been extended to twelve weeks.