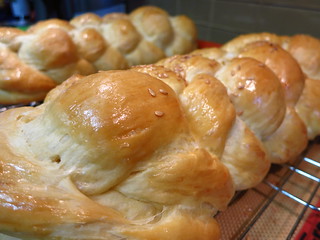 Notes: Reinhart is a prolific baking book author, so he's published many challah recipes, some of which I've made in the past. But looking through this blog's archives, I cannot find a writeup of the challah from either The Bread Baker's Apprentice nor Whole Grain Breads. Anyhow, I began this two-day recipe on Thursday night. I measured everything by weight, except the egg yolks and yeast. With only a half dozen eggs in our fridge, I used all 6 yolks and accidentally let a white slip in also. I hoped that the reduced amount of yolks wouldn't compromise the texture too seriously, as the recipe notes that the fat and lecithin are major contributors to the soft texture.

In the morning, I opened the refrigerator door to see a giant mass of dough escaping from the lidded bowl in which it was expanding into. Even though I weighed the top of the lid, a "muffin top" of rapidly drying dough peeked out above the rim. I punched and kneaded the dough into a smaller ball, then let it warm up on the counter for an hour. To get an even braid, I scaled out even pieces of dough, then rolled them into two sets of 6 strands each.

I let the bread rise, and left the recipe with my wife to bake during the day, in time for Friday night dinner at a friend's house. Unfortunately, as you can see from the pale colour, the bread didn't quite turn out as nicely as we hoped for. Specifically, the egg wash didn't achieve a deep brown shade. The target internal temperature was reached so my wife knew the bread was fully baked. When we looked at the recipe more closely, the baking temperature called for in a convection oven was 300°F! That's quite low for a bread, and was the likely reason for the pale colour. I cross-checked in Amazon's scan of the book, and it's not a typo on Ruhlman's website.

Since the bread turned out so wonderfully (very soft and flavourful), we would make this recipe again, but try using the higher baking temperature.