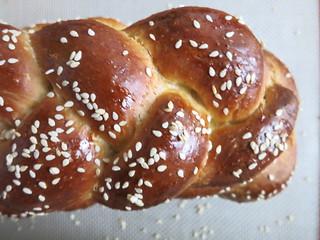 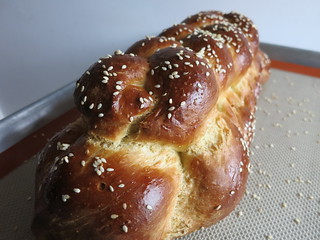 Notes: Despite making dozens of challahs, I somehow haven't made and documented the Cook’s Illustrated version. For this week's Shabbat meal, I started the recipe on Friday morning since it didn't require making a poolish/starter/pre-ferment. I like that a whole number of eggs is used: some recipes call for extra yolks, but only one is needed here, and the leftover white is used in the glaze.

Because I'm always sneaking in little bits of various flours I have on hand, I added a few ounces of kamut flour into the dough. As a result, I didn't need the additional ¼ cup flour to keep the dough from sticking. For the first rise, my dough took the full two hours to double, but was quite active in the second and final proofs. The double (celebration) braid helps to make rounder slices, as the standard 3-strand braid leads to a somewhat rectangular slice.

At the 30 minute mark of baking, the internal temperature was only about 170°F so I left it in for the full 40 minutes, at which point it was fully baked. As expected, a challah made with butter and sugar was super tasty, and made for a delicious platform on which to slather Nutella, almond butter or strawberry jam. This bread leans towards a cake-like challah, as it relies on added ingredients for flavour, rather than using a starter to build a more complex flavour. Nevertheless, it's a good, basic recipe to have on hand.