For a party we planned on hosting on Saturday, I wanted to make another Milk Bar recipe. So without any further ado, here's my breakdown of this project:

This is an item that is hard to find here in Toronto: most stores either don't carry it, or the quality isn't high. Gone are the days when I'd travel across the city to source an ingredient. Instead, I decided to try and make it myself following this recipe, attributed to Pierre Hérme. A bulk vendor in Kensington Market offered both shelled and unshelled unsalted Iranian pistachios, but I didn't like the look of the dusty unshelled ones, so the three of us sat down and plucked the nuts out of their shells over a few nights. I calculated I needed a double batch of the recipe, and followed its straightforward procedure. Toasting the nuts helped to loose their skins, which I rubbed off to reduce bitterness. At first, in the food processor, the nut mixture was just a coarse mass of chopped, syrupy nuts. With a generous amount of sunflower oil trickled in through the feed tube, the mixture began to move. After 5 minutes or so, it turned into a smooth, green paste. The taste of this homemade pistachio paste is intense: very nutty and rich, and quite sweet. It differs from a nut butter, in that there is added sugar and oil. But from reading other experiences online, a cake made with pistachio butter does not turn out the same. I kept the finished paste in a glass container, and refrigerated it for the week.

On (Good) Friday morning, I made one recipe of milk crumbs, replacing the wheat flour with brown rice flour (since it was Passover). Only half the batch is required for this cake.

Later on Friday, I worked on the cake. Since the nut paste was sweet, and Tosi's taste is already sweet, I reduced the confectioner's sugar in the recipe by half. I opted for the gluten-free option, which replaces AP flour with ground almonds, so that guests observing Passover would still be able to partake. And instead of pistachio oil (another hard to find, and/or expensive item), I used hazelnut oil (also expensive, but something which I had on hand). Since I still don't have a quarter sheet pan, I improvised using a half sheet pan, and a barrier made from a cake ring, parchment and a Silpat (see the photo). After baking 22 minutes, it was still a bit wet, so I let it go longer. Unfortunately, I forgot about it for a bit, and by the time I took it out, it had turned quite brown. The texture is quite delicate and crumbly, as to be expected for something made with egg whites and nuts.

This recipe is unusual to me in that it calls for the use of a blender as well as gelatin. Normally, lemon curd is a lot of egg yolks, sugar, lemon juice and butter. Here, in Milk Bar's recipe, the first three ingredients plus a lot of zest, are blended together. The 64 oz Vitamix container had no problem with the small quantity of ingredients, but incorporated a lot of air into the mixture. On the stove, the mixture came to a boil quickly but fortunately did not scramble. Back in the blender, with a few knobs of cold butter and the bloomed gelatin, it took no time to melt and emulsify the fat to form a smooth, buttery and lemony curd. Absolutely delicious!

I think the butter was a bit too cold, as it formed lumps while creaming it with the sugar. But with lots of whipping after incorporating the pistachio butter, it became homogeneous. I was pleased with the light green colour, as many other people who've made and photographed this cake on the Web had yellowish or brownish frostings.

To be ready for Saturday afternoon, I assembled the cake on Friday evening. Using the same setup as I employed for the previous layer cake, I placed the acetate strip inside a springform band, atop a parchment lined baking sheet. To keep the already-high calorie count in check, I skipped moistening the cake rounds with pistachio oil. The rounds were very soft and I couldn't transfer an entire disc from the baked layer into the ring without it breaking. Perhaps because my sheet cake was spread slightly larger than a quarter-sheet pan, my finished cake was not a full 6" high. 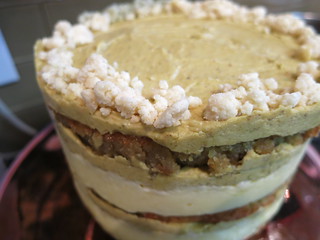 This is another winner from Milk Bar. Nutty, crunchy, soft, tangy, sweet… there's a lot going on here, but it comes together beautifully.