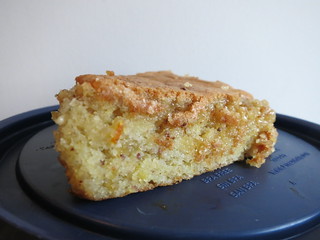 Recipe by Melissa Clark from The New York Times, 2014 April 09

Notes: The last dessert I made for Passover was a nut cake based on this recipe from the NYT. It is not a pure ground nut cake, but has a bit of quinoa flour, which I made by pulverizing white quinoa in a spice grinder. To make it more diabetic-friendly, I used about ¼ cup of white sugar, and about a half cup of Xylitol granules. Most nut cakes use whipped eggs as their leavening agent. Without any gluten to provide structure, this cake puffed up in the oven but fell and sunk during cooling. Unfortunately, the biggest problem with this cake, which we only discovered when we cut into it, was that the centre was damp and underbaked. I'm guessing the Xylitol's chemistry was the cause. As with the lemon sorbet, using sugar substitutes requires trial-and-error to get a perfect product. The function of sugar in baking is complex, so replacing all of it is almost guaranteed not to work out.