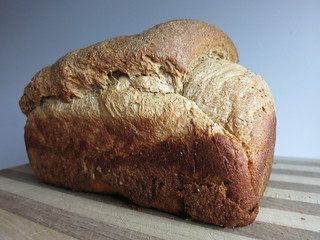 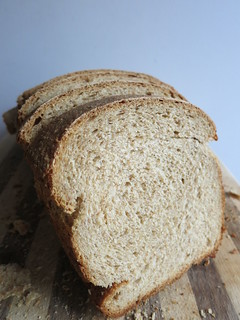 Notes: I hadn't made a rye bread in a while, and looking back in this blog's archives, noted that this recipe hadn't been visited before. On a Sunday morning, I started with the soaker, using buttermilk and dark rye flour. The next morning, I made the biga, and substituted Antimo Caputo "00" Chef's Flour for bread flour. My incorrect understanding of 00 flour is that it denoted a flour with a particular protein content, but it's a European measure of how finely ground the flour is, and how much ash content it has. From the company's spec sheet, I learned that this flour had a protein content of 13.5%, perfect for making bread.

On Monday evening, I made the final dough using molasses, honey and vegetable oil. It rose nicely during both proofing periods. In the oven, it sprung so much that one end opened up. I have a habit of not committing lessons to memory, and I know exactly what I did wrong: not tucking the ends under after shaping. Also, since rye flour doesn't have a much gluten as wheat flour, I attributed the crumbly texture to insufficient kneading. Overall, I liked this bread's texture and flavour, especially when toasted.