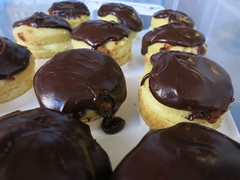 Notes: For Gabe's second 3rd birthday celebration (which included friends and family at a local playground centre), we had some leftover chocolate avocado cupcakes in the freezer, and decided to bake another batch for adults. I chose this Boston Cream one, as it sounded fun, and it's been ages since I've had that type of Tim Horton's donut.

The pastry cream was the first thing I made: it comes together quickly and can be refrigerated the night before. The cupcakes themselves were straightforward, with one interesting technique: hot milk and butter are poured slowly into the batter. I don't understand the purpose of this step, whether it improves the crumb or the texture or the flavour. The chocolate glaze was also a cinch to make, combining hot cream, chopped chocolate and corn syrup, and it went into the fridge overnight also.

On the morning of the party, I quickly assembled the treats. First, I re-warmed the glaze gently in the microwave, then split the cupcakes in half with a serrated knife. Using a cookie scoop, I portioned about a tablespoon of pastry cream onto each cupcake bottom, then dipped the tops in the glaze. This last step is a bit messy, and spooning might be better.

Despite a bit of cake flour in the batter, I found the cupcakes to be slightly on the tough side. I also found the cake-to-cream ratio to be too high: hollowing out part of the cupcake would make this dessert much better. However, it's a fun idea for a cupcake, and one that I would try again.