The first issue of Lucky Peach I bought was from Good Egg in Kensington Market. It was Issue 2: The Sweet Spot and featured such awesomeness such as an article on the best apricots in the world, a recipe for burnt miso, and whimsical phony fruit stickers. It's out of print now, and eBay copies go for upwards of $50USD!

Anyway, I bought the issue because of the Arnold Palmer Cake within. The recipe (scan) sounded unusual (tea leaves in the cake batter) and amazing (lemon mascarpone). I've never found an occasion to make it, but now, more than two years later, decided to make it for Father's Day. Here is a chronicle of this project: 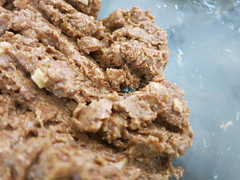 This was a no-brainer to put together. I omitted the instant tea powder, since I didn't have any (more on that below) and I wanted the almond component to taste like almond, not tea. The finished crunch clumped together, and wasn't that crumbly. Next time, I'd use more feuilletine or almonds, or reduce the almond butter. 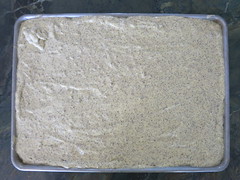 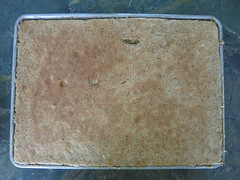 As with the pistachio cake, making a double recipe of the cake was simpler than trying to use a makeshift quarter-sheet pan. And I would have two cakes, too! This was the first time I've cut up 18 tea bags and dumped their contents into a bowl of flour! The flavourings in this batter aren't subtle: ¼ cup lemon juice, plus 1 tsp of lemon extract (I used lemon oil), plus buttermilk. Our oven is a bit wonky right now: it took almost one hour of baking for the half-sheet pan of batter to be fully baked. I wrapped the cooled cake layer in plastic film, and let it sit in the basement, at room temperature. 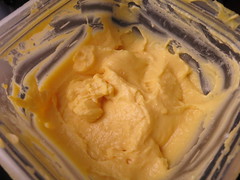 Having made plenty of lemon curds before, I was not surprised to see whole eggs in the recipe. I knew I would have to be careful with the heat to avoid getting scrambled eggs, and also knew that I would have to strain the curd to get the lumps out. Sure enough, despite constant stirring over my lowest gas burner, the mixture started to cook at the bottom edges of the pot. Because of the gelatin, the curd sets in the refrigerator to a stiff paste. Because of this, it was easy to incorporate the mascarpone smoothly. 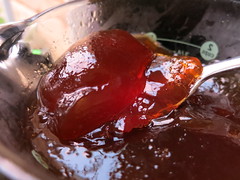 Ah, the tea jelly. For the impatient reader, I ended up making this FOUR times before getting it right, going through 1kg of sugar and over 30 tea bags.

First, the matter of the unsweetened iced tea powder. It's available in the US (e.g. from Walmart) but despite walking into a half dozen stores in my neighbourhood, wasn't able to find it. The dollar store had an artificial fruit-flavoured iced tea powder but that was the closest I came. Every other store either sold ready-to-drink, sweetened, lemon iced tea, or something called "liquid water enhancer" which you add into water. I decided that I didn't really need the extra iced tea flavour kick, and skipped it.

I also decided to skip reserving a portion of the “bitter tea soak” to brush onto the cake layers. I just steeped the tea bags in about 450g of boiling water. I didn't have pectin NH so substituted an equivalent quantity of Certo reduced-sugar pectin. After several hours in the refrigerator, the mixture was only slightly viscous. Uh-oh: my plan for having this cake ready for Sunday dessert was suddenly in jeopardy. My salvage attempt was to re-heat the steeped tea mixture, and add another teaspoon of pectin. Still not set.

I should have known that that was way too little pectin to gel two cups of liquid. A packet of pectin usually sets about 4 to 6 cups of fruit puree for jam. On Monday, I re-made the tea jelly, and decided to try using three leaves of Gelita Gold gelatin. Unfortunately, I let the sweetened tea concentrate cool too much, and the mixture after adding the bloomed gelatin turned cloudy and didn't set. I then spent a lot of time researching what pectin NH is, this magical substance that can gel two cups of liquid with only a half-teaspoon. I learned about high-methoxyl and low-methoxyl pectin, the need for calcium activation, blah blah blah. There also didn't seem to be a Canadian source of pectin NH in small quantities. The recipe actually says that pectin NH is "easily obtained online" but not so much in Canada. Even Modernist Pantry doesn't seem to have it, the closest being this, but it requires calcium to activate. Pectin NH seems to be something that has the pectin and calcium premixed. I tried once again, this time, being much more careful. I placed the tea bags in a container, poured the boiling water over, added the sugar and bloomed gelatin, and stirred until everything dissolved. Guess what? FAIL.

On Tuesday morning, I decided to go back to pectin, and to follow the Certo directions as if I was making jelly. For about 450g of tea concentrate, that meant about a half package of reduced-sugar pectin (about 25 g). The tea jelly recipe had a lot of sugar and a bit of acid, the same things that setting a fruit jelly requires, so I was hoping this would do it. I poured everything into a glass measuring cup and let it refrigerate during the day. In the evening, I was finally rewarded with a softly set tea jelly! 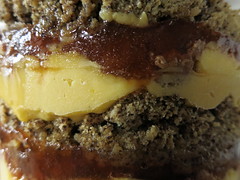 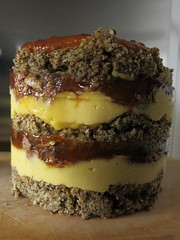 Once all the components were made, putting the cake together is just stacking. One layer of cake, a dollop of lemon cream, a sprinkle of almond crunch, and a slathering of tea jelly. Repeat. I found the cake layers to be very, very crumbly. It didn't have enough structure to be transferred intactly from the baking sheet into the cake ring.

We're going to share this with neighbours tonight, and I'll make another one for a housewarming this weekend. I'll update with tasting notes once we sample it! 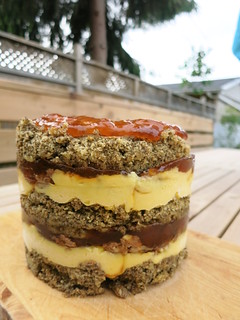