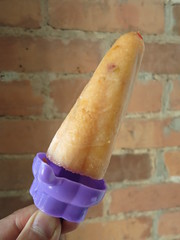 Stone fruit, especially nectarines and peaches, have a very short shelf life. After getting them from the market stand, they start to deteriorate rapidly, attracting fruit flies and mold within a few days. After holding a basket of overripe nectarines in the fridge for a few days, I decided to try turning them into popsicles.

Some time ago, Flick bought a recipe book that was full of interesting popsicle flavour combinations, made using local, seasonal fruit. And on our trip to New York City last October, we happened to try some of the creations of the folks at People's Pops at Smorgasburg. Flipping through the book, I found several combinations including peach or nectarine, all of which sounded amazing.

The recipe I used is pretty simple: roast the nectarines in the oven until they're soft, then purée them with simple syrup infused with basil and a bit of lemon juice. I didn't run the blender for an extended period, choosing to allow a few bits of skin and fruit to remain. The popsicles taste intensely of nectarine (duh), with a just a faint, herbal undertone. I would prefer a little more tartness, and would reduce the simple syrup by a ¼ cup or so next time.