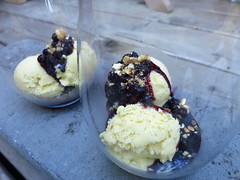 A couple of weekends ago, a recipe in the Saturday Globe and Mail caught my eye. It was for corn ice cream, which is an unconventional flavour, but one I knew I had to try. Unlike, say, some of these seafood based flavours.

The recipe in the paper is attributed to a chef from Simcoe County. The yield was way too much for my ice cream machine, but a half batch was perfect. I started by stripping the kernels from four ears of corn using yet another tool acquired after we got married. These, along with the cobs, went to simmer with the cream and milk. After reheating the corn-infused liquid, I tempered the egg yolks and sugar, then cooked the combined mixture until 185°F. It never really coated the back of a spoon for me, but I didn't want to risk scrambling the custard.

Once off heat, I poured everything (including the corn niblets) into a blender and ran it until all the corn was smooth, and the liquid turned foamy. After tasting a spoonful, we decided to strain the mixture to get out all of the fibrous hull. At this stage, I also found the custard to be quite sweet. For the compote, I simmered a pint of wild blueberries with a bit of sugar and water, reserving some of the fruit so that some of the berries would stay whole.

The next night, I was ready to assemble the dessert. I took a handful of salted, toasted corn and chopped it in a mini food processor. Making the praline seemed excessive, given the sweetness of the ice cream already. To serve, I put two small scoops in the bottom of a glass, spooning the compote around the ice cream, and topped it with a little toasted corn. Flick and I both agreed that it's an interesting dessert, one that we both had no hesitation in trying, but also one in which we wouldn't necessarily need to make again. I think a better way to eat the corn ice cream would be in a sandwich, with the sides made from corn cookies!