Having a few friends over for supper is as good an occasion as any to make fresh bread. While flipping through Carol Field’s bread book, I saw an herb loaf that I thought would make a good accompaniment to our Middle Eastern dinner menu.

The recipe in The Italian Baker cautions that the dough is slightly large for a stand mixer. I went ahead with the full recipe as I have a 6-quart bowl. Despite the soft dough, it did indeed strain my KitchenAid to the point that I could smell the motor oil burning. 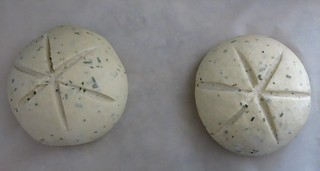 There’s a lot of yeast in the recipe, so the first and second rises were very quick. With plenty of surface tension in the puffed rounds of dough, the razor slashes caused the bread to open up nicely. I forgot to sprinkle the coarse salt until after I spritzed the oven with water, so the grains didn’t stick too well to the gelatinzed dough. 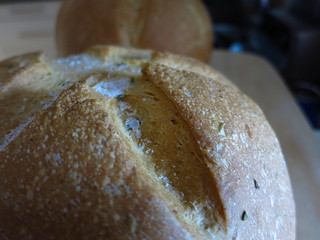 Despite using the full four tablespoons of freshly picked rosemary, I didn’t find this bread to be very fragrant. It’s a decent white loaf, and made a fine surface for hummus, but it’s not a bread I would need to make again.