The Labour Day weekend was an opportunity to make something a little more time-consuming and complicated: croissants. I love these buttery, flaky, viennoiserie pastries and often buy them for breakfast, plain or filled with almond or chocolate.

I’ve made croissants a few times in the past, but I’m definitely out of practice. The Cook’s Illustrated recipe “promised success” and gave very detailed instructions. In particular, they specified high-protein flour and European (i.e. high-fat) butter. I used the former, but just stuck with regular 80% M.F. supermarket butter.

On Monday around noon, I started by making the dough and butter block. To begin laminating, I pulled out a measuring tape (the home improvement kind) to be sure I rolled out the dough to the specified lengths. From past experience, it’s important to make accurate cuts and folds, so that the final dough isn’t too thick or thin, and so that each pastry is similarly sized. 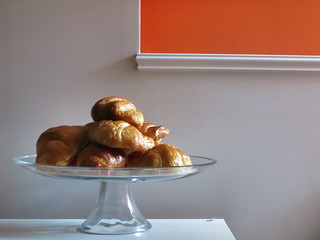 My first stumbling block occurred after I enclosed the butter block in the dough. Instead of smoothly spreading through the dough, the butter broke and formed little islands, kind of like an ice floe. I proceeded anyway with the folding, rolling and chilling procedure, and placed the wrapped, multi-layered dough in the fridge overnight. 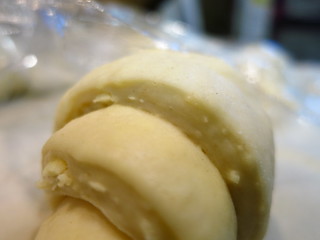 Very early on Tuesday morning, I took the dough out of the fridge, now inflated and greatly stretching the plastic wrap. It was very soft and puffy, not as smooth and uniform as the one in the Cook’s video. I continued with shaping and marking the dough, cutting and rolling it into triangles. A few bits of butter started to burst through the thin dough, but not enough to interfere significantly. As you can see from the photo above, my layers weren’t very distinct. 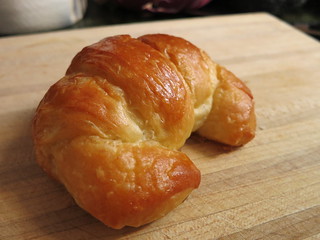 In half of the croissants, I put a few pieces of chocolate in before rolling them up. While I went to work, Flick brushed the dough with egg wash, and oversaw the final proofing and baking.

When I came home, I was rewarded with the sight of beautifully puffed and browned croissants. I didn’t get a chance to sample them fresh out of the oven, but the next day, I sliced one open and was a bit disappointed. The insides of my croissants resembled bread. Instead of their characteristic flaky and layered interior, mine resembled (but tasted just as good as) brioche. 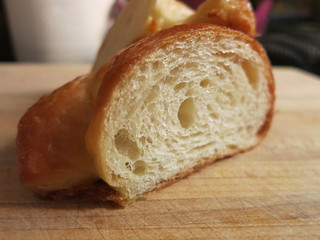 I have a few theories: I may have let the dough get too warm at certain points, leading the butter to blend into the dough rather than forming a distinct layer. And most probably, problems with using regular butter was somethingthe headnote of Cook’s recipe warned about: “the higher water content … caused it to break up in the dough, which meant that the dough layers stuck together”. I’ve seen the Stirling Churn 84 butter at a few stores in the area so I think I’ll try that next time.

As for cost, a good croissant is about $2.50 in Toronto. This recipe makes 22 pastries. At $5 for a pound of butter plus a few dollars in other pantry staples, it’s 10× cheaper to make your own.