A search of “sour cream” and ”muffins” in Eat Your Books brought up a muffin recipe I hadn’t made before. They promised a tender, moist muffin with lots of flavour and a sprinkle of sugar on top. On a weekday morning, I attempted to make them for breakfast, but they turned out to be more work than I anticipated.

The original recipe comes from Cook’s Illustrated in their Sep 2002 issue. My first step was to chop up the dried apricots. I literally had a mixed bag: some tart, dark orange ones in the fridge, and some plump, regular store-bought ones. Trying to dice these in a mini food processor was ineffectual. I ended up using the full-size one. We don’t usually have orange juice in the fridge, so I had to juice 5 or 6 clementines. After microwaving the apricot-juice mixture, and letting it sit for 5 minutes, all of the liquid was absorbed. I kept the mini-chop out, and used it to make the orange sugar. Two-thirds of a cup sounded like a lot for a dozen muffins, so I reduced the amount to a scant half cup. 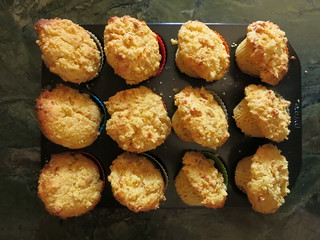 Overall, the muffins turned out as promised: tender and moist, not dry and crumbly. I found the apricots I was using to be too tart, but liked that the finely chopped fruit meant you tasted a few pieces in every bite. The orange sugar is a nice touch, but does raise the sweetness level. While the muffins were a success, it’s no wonder that they taste good, with the inclusion of sour cream, butter and sugar in the recipe.