I’m not a huge brownie fan, as evidenced by the lack of brownie posts on this site. My preference falls somewhere in the middle of the fudgey vs. cakey spectrum. I also like nuts in my brownies, especially walnuts. But an ingredient surplus combined with a magazine recipe led to this weekend’s dessert project, cream cheese brownies.

The recipe I used comes from the July/August 2014 issue of Cook’s Illustrated. This isn’t the first time the magazine has tackled this exact treat (they published a recipe in January 1999), but they somehow felt a need to recycle the topic and improve on it some more. 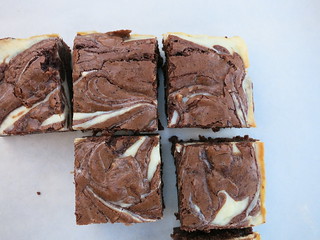 Making the cream cheese filling was easy. I incorporated the sour cream all at once, instead of tempering it gradually, and ended up with small lumps in the mixture. This didn’t affect the final product though. I made one small change to the batter, based on a discussion in the article. Instead of four ounces of unsweetened chocolate, I replaced half with bittersweet chocolate, reducing the sugar to 1 cup.

The marbling process is a bit fussy: you need to spread the batter and filling evenly, then microwave some of the batter, drop it over the base, then swirl them together. I needed the full 40 minutes of baking time. 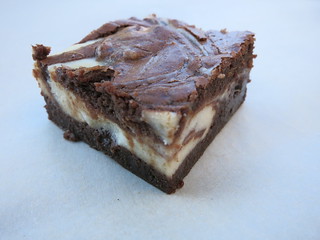 All in all, this brownie turned out alright. Good balance of sweet and tangy, and the 2” serving size is just right. I wrapped each square individually with the foil used to line the pan, and now have a bag of them in the freezer, ready for whenever a brownie craving strikes.