Muffins that feature an abundance of fruit, nuts and seeds are sometimes called “morning glory” muffins. It turns out that a recipe bearing this name was first published in Gourmet more than 30 years ago. Despite its popularity, I tend to avoid muffins overloaded with a lot of mix-ins. However, I am a big fan of Yotam Ottolenghi, and his eponymous cookbook featured a morning-glory-like muffin that sounded good enough to try.

The part of the recipe that interested me was the topping: it was a crumb topping made with seeds, oats and honey. In the first batch I made, I didn’t have pumpkin seeds, and also subbed sweet potato for the carrots. At the minimum baking time, the muffins looked quite wet and undercooked. After 15 more minutes, they looked ready. Fresh out of the oven, they were amazing: a crunchy, textured topping covering a moist interior filled with fruit and nut. They seemed a bit too moist though, and could have used a few more minutes of baking. After a day or two, the topping softened and wasn’t as tasty. 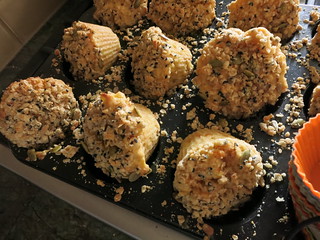 For the second batch, I followed the recipe more closely, but reduced the sugar a bit, and omitted the raisins. I still had plenty of extra crumb topping from the first batch, so just added the missing pumpkin seeds. I also raised the baking temperature to 375°F. These changes made only slight improvements, and I found the interior to be still too wet. Overall, a good change to my usual breakfast items.