Our hand-picked haul of McIntosh apples from last week didn’t inspire much baking. For one, this variety is best for applesauce, as it turns to mush when cooked, so cake and pie recipes usually call for other kinds. A Cook’s Illustrated recipe for Dutch apple pie sounded good, and specified Macs in the ingredient list, so I tried it out two different ways.

The recipe actually calls for two types of apples, the other being Granny Smith. The past Tuesday, as part of our 1000 Dinners TO event, I made the quick version which omits the crust, and produces an apple crumble instead. I hesitate to use the word “Dutch” to describe it, since we omitted the raisins. But in surveying half a dozen recipes for “Dutch” apple pies, there is wide variation on the inclusion of cream or raisins in the filling, and the type of topping (lattice or streusel). 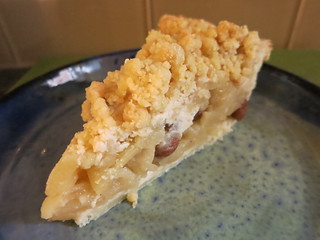 Making this filling requires almost cooking the apples completely. On both occasions, my apple filling didn’t yield a lot of liquid when it cooled, so there wasn’t much to reduce when I combined the juice with the cream. The streusel is pre-baked, so it stays crisp when spread over the filling. For the quick version of this pie, I made the apple filling the day before, and was able to assemble and bake it just before serving.

Overall, I would rate this pie as mediocre. Despite liking raisins, I found that they were distracting in this pie. The heavy cream added richness that wasn’t necessary and muted the flavour of the apples. As a final criticism, leftover pie slices weren’t good, as the streusel and filling combined into an unappetizing pasty mess.