For a friend celebrating her birthday this past week, we offered to make a dessert. Her parameters to me were that it be a chocolate cake. To keep things simple, we decided on a frosted layer cake from one of Alice Medrich’s books. 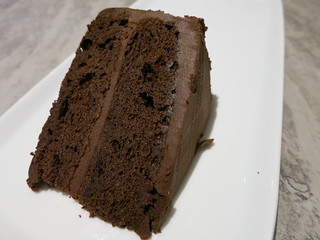 The Chocolate Sour Cream Layer Cake recipe I used comes from her book Chocolate Holidays but the same recipe appeared in one of her earlier volumes. The recipe calls for Dutched cocoa powder (which Fry’s Cocoa is), but I bought some in bulk from a baking supply store, and it was much darker in colour, so who knows.

Sour cream is used both in the cake and the frosting. The latter is made simply from a bit of instant espresso, melted chocolate and sour cream. It really does need to be used right away, as it firms up quickly. The yield is a bit stingy though. Cream/icing/frosting is usually the best part of cake!

This was pretty good, uncomplicated but delicious. The cake itself was fine-crumbed and a little dense, and the frosting was chocolatey and tangy.