Disappointed by the loaf from last week, I looked for another multigrain bread and found one I’ve never blogged about from Peter Reinhart’s classic book. 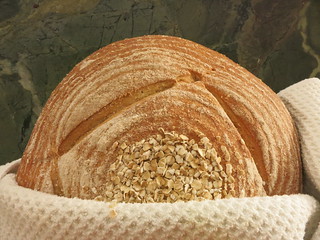 I feel I’ve made this bread before, but can’t find an entry about it in my blog. The recipe’s ingredient list isn’t that long, but does include 3 tbsp of cooked brown rice, not something I had on hand. But everything else was found in my pantry: oatmeal, cornmeal, bran, and AP flour.

The bread starts with a grain soaker, which I let sit for 24 hours. After the dough was kneaded in the mixer, I let it proof at room temperature for 90 minutes, then shaped the dough into a boule. I used a banneton lined with brown rice flour and left it in the fridge for the final proof, as we had company over. 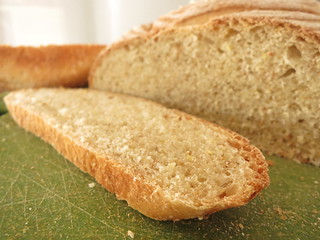 When it had risen well above the lip of the proofing basket, I baked it in the oven, on a baking sheet placed directly on a baking stone that was preheated on the floor of the oven. I needed a few extra minutes of baking time, before reaching the target internal temperature.

This bread was great. Good, open crumb, and a fairly light texture. It doesn’t taste “healthy” but it’s not a 100% wholegrain loaf. Personally, I want a bread to be tasty as well as good for you, but I’m not quite ready to completely give up white flour. I feel a blend of flours is a good compromise. That said, this bread doesn’t use whole wheat flour at all, but does have some wheat bran in it.