I love a good deal, and when I saw a used copy of Bouchon Bakery online, I bought it right away. Thomas Keller has a number of restaurants that I’ve never eaten at, save for one brunch at Bouchon Bistro in Vegas. But the book’s photographs, precise recipes and the authors’ reputations were compelling enough for me to make the banana muffins three times over the past week.

The recipe has an ingredient list and measurement precision that indicate it’s been scaled down from a commercial bakery recipe. So as long as you have a digital scale, it should just be as easy to measure 168g of flour, as it is to scoop out 1¼ cup + 1 tbsp! For the leaveners, though, my scale isn’t precise enough to measure fractions of a gram, so I just used the volume measurements.

There were a few practical substitutions I made: vanilla extract for vanilla paste, and buttermilk for crème fraîche. The quantities of these ingredients were small enough that I didn’t think they would affect texture or taste. As the yield was only 6 jumbo muffins, I made a double batch. The streusel recipe itself makes way more than you need for one batch of muffins, about four times as much. 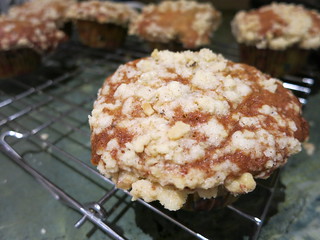 Since I didn’t have jumbo muffin tins, I lined my regular large ones with silicone cups. After an overnight rest in the fridge, I made the first batch (about 9 large muffins). They turned out not fully cooked at the 35 minute mark despite the smaller cup size. I don’t know whether this is my wonky oven, or an overly wet batter or something else. The muffin itself was extremely moist and tender, and wet enough that they didn’t release cleanly from the silicone. Instead of providing a nice crunch, the streusel sank into the batter and melded into the muffin tops.

The following morning, I baked the remaining batter, but deposited more in each cup, and leaving the tin in for a longer time in the oven. Not surprisingly, these turned out pretty much the same. This time, they were larger (obviously) and held more of the streusel.

Not content with these results, and refusing to believe that the recipe would turn out less than spectacularly, I made one more batch later in the week with a few more changes. I lined the tin with paper cups, then sprayed them with pan release, and I raised the oven temperature to 340°F. This batch turned out the best thus far, well-cooked and browned, but still moist and tender.

I can’t help but wonder whether using jumbo muffin cups would improve the results of these muffins. But the last thing our kitchen needs is another baking pan. I plan to try all the muffin recipes in this book (in fact, I already made the bran ones but need to try it a few more times) and will document my experiments here, of course.

Update: On a work trip to New York City a week later, I stayed in Manhattan not far from a Bouchon Bakery. I was disappointed to find that the Rockefeller Center location didn’t sell banana muffins, so I tried a blueberry muffin. It was a very good muffin, but my life was not changed.