Apple pie doesn’t need a lot of improvement. Sure, there are crumble toppings, cream, raisins or even nuts thrown in the filling sometimes. But once in awhile, I come across a new version that catches my eye.

When I first saw this Alton Brown recipe, a few years ago, I noticed all the uncommon additions to the filling: lime juice, apple jelly and, most intriguing, grains of paradise. I had no idea what they were, or where to get them. A friend found some for me at a spice store in Kensington Market, and this past week, I finally got around to trying the recipe.

For the apples, I used a mix of Braeburn, Honeycrisp and Northern Spy. For the crust, I couldn’t find the Earth Balance Vegan Shortening that I normally use, and tried one of their other products, called “Vegan Cooking and Baking Sticks”. It wasn’t like shortening at all, and resembled margarine. Anyhow, the crust turned out fine, baking up light and crispy. I also liked that the recipe didn’t require a resting and chilling period for the rolled crust. 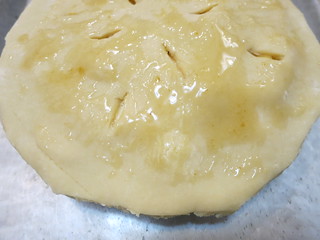 The initial step of letting the apples exude some juice, then reducing it, is to produce a glaze for the top crust. This seems like an unnecessary and time-consuming step since one could easily melt some of the apple jelly and brush that onto the pie dough. 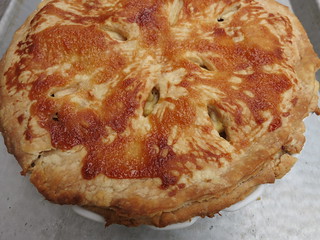 The baked pie was delicious. Without any lemon and cinnamon at all, I could appreciate the flavours of the grains of paradise and lime. Or maybe it was the distinctive limey taste of tapioca starch? 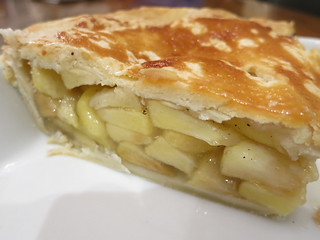 I made this pie a second time, but streamlined the process by microwaving a batch of Golden Delicious apples for about 3 minutes on high. This caused the juice to come out much faster, and also helped to soften the apples.

Compared with pies I’ve made that require chilling the dough, or pre-cooking the filling, this recipe produced a pie that was just as delicious, but with less effort.