I could never bring myself to actually purchasing a slice of Crack Pie®. It sounded way too sweet and plain to me. But something inspired me to try baking it at home this week, and so on Wednesday evening, I set out to make this notorious dessert.

The first bit of the recipe is easy: an oatmeal cookie dough baked as a large flat slab. My pantry and local grocer didn’t have old-fashioned oats, so I just used quick-cooking oats. I spread the dough into half of a half sheet pan. 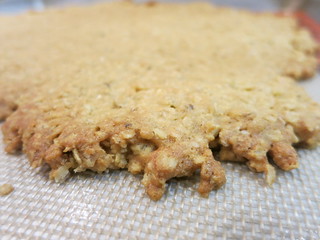 The filling was quite easy to make. I substituted salted butter, in place of the sweet butter and salt called for in the recipe. The mixture is really wet and was barely emulsified. 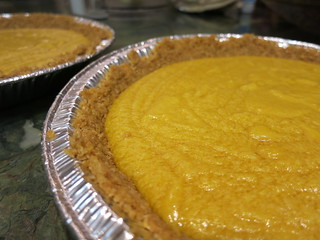 It’s hard to tell from the following photo, but after the specified baking time, the interior was still soupy. It didn’t just jiggle, but sloshed around underneath the barely set surface. I gave it about 10 extra minutes and hoped for the best. 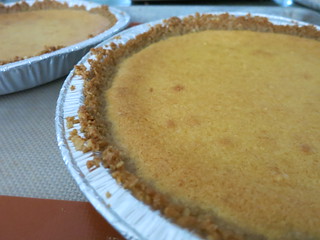 After an overnight freeze, the pie separated a little bit, with a thin film of butter settling on the edges. Served refrigerator cold, the pie was a bit runny, but tooth-achingly delicious. The oat crust provided a crunch, while the rich filling had a complex flavour that almost made you forget how much dairy and sugar it contained.

From my online searches, there have been many reports about runny Crack Pie fillings. If I ever made this again, I would try baking it for a longer time, possibly covered towards the end. Then again, why wouldn’t you make it yourself, considering that the restaurant charges $48 per pie?

Update: I tried the real thing from Momofuku a few weeks later, and the interior was baked through, but the slices were very thin. Perhaps the secret is to use a larger diameter pie shell, and/or filling it less?