Muffins are often criticized as being little cakes, rather than a healthy choice at breakfast. Many whole grain muffins indeed are loaded with sugar or topped with icings to compensate for their coarseness. Thomas Keller’s take on bran muffins falls somewhere in the middle, but are among the best I’ve had.

The recipe from Bouchon Bakery is one I’ve made three times now. The first time was back in November when I first got the book: that attempt was a miserable failure. I had difficulty adapting the recipe to regular sized tins, but held off on buying new equipment. 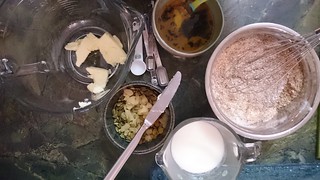 Sounds pretty good, right? I’m sure every bran muffin would be improved with the addition of honey, cream and pears! Once everything’s assembled, we got started by creaming the butter and sugar: 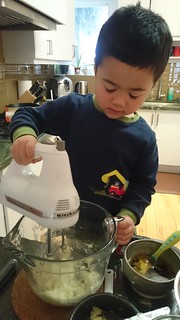 Once mixed, the batter needs to rest in the refrigerator overnight, or up to a day and a half. I messed up the first time, and forgot the leaveners, and had to emergency-stir them into the completed batter. 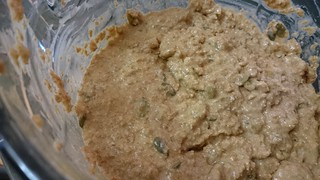 The recipe specifies spraying the papers with pan spray, before filling them just below the edge of the tin. Mine were pretty full. 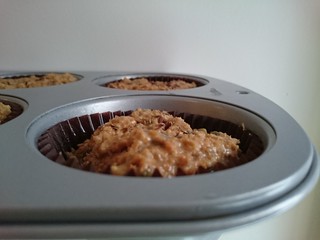 Another screwup for the first attempt this week was not lowering the oven temperature. Instead of reducing the 425°F down to 325°F, I let the muffins bake for 20 minutes before realizing my mistake. They turned out fine, if a little dark on top. This is the result of the second, more careful batch: 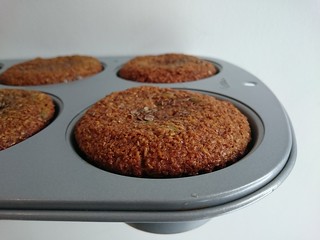 As they say, the third time’s the charm. These bran muffins don’t taste “healthy” but you don’t feel guilty after eating them. They’re light and moist, with lots of interesting things in each bite. Even with the overnight refrigeration, lengthy ingredient list and small yield, I’d make these again.