We’ve established a tradition of cupcakes for birthdays in our family. My son’s fourth birthday celebration was to be a pizza lunch in the park on the weekend, but we wanted an additional cake to celebrate on his actual birthdate. My wife suggested an ice cream cake, and as usual, I picked something a little complicated. 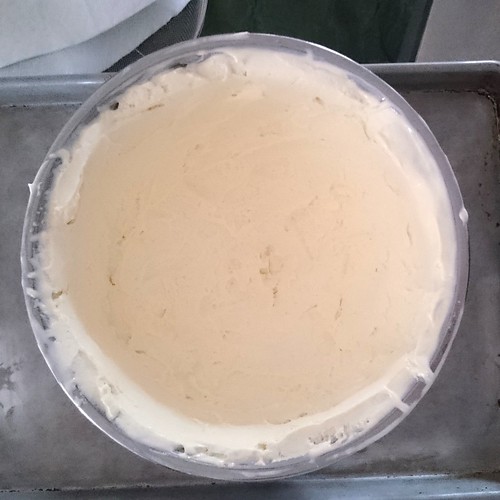 Martha Stewart’s recipe for this ice cream bombe calls for three ice creams, a cake, a ganache and a topping. To save myself some work, I used store-bought vanilla and chocolate ice creams. I softened the entire 1.89L tub of vanilla ice cream, and used a large spoon to line the inside of a mixing bowl that I chilled in the freezer. 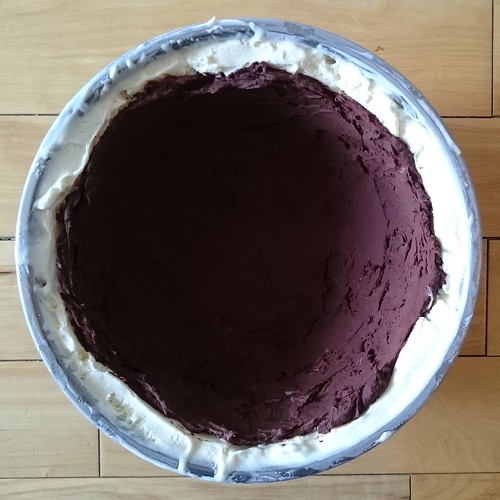 The next step was to make a banana ganache. I was able to accelerate the chilling of the chocolate mixture by putting it in the freezer, and stirring it every ten minutes or so. The ganache got firm quickly when spread on the ice cream layer, so I had to work quickly to apply it evenly. 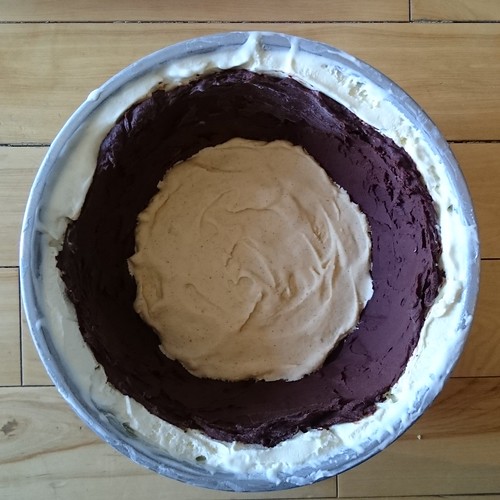 Someone suggested that I replace the pistachio ice cream in the recipe for peanut butter ice cream. That seemed like a brilliant idea to me, so I made a batch using a recipe from A Passion for Ice Cream by Emily Luchetti. It calls for infusing cream with roasted peanuts, as well as blending in peanut butter into the ice cream base. This layer is not spread all over the inside of the bowl but forms a flat layer in the bottom. 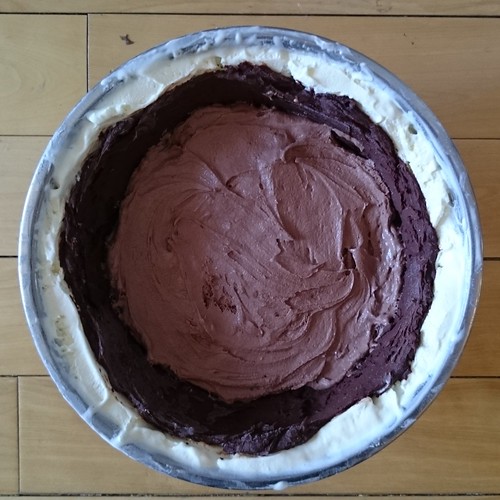 The chocolate ice cream is also spread flat on the bottom of the bowl, over the peanut butter ice cream layer. 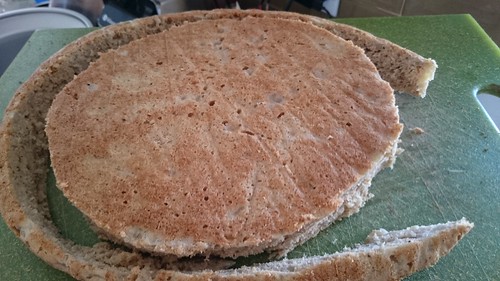 The banana cake is like a banana quick bread, baked in a 9” round tin. It incorporates both mashed and diced banana, and bakes up soft and delicate, thanks to the use of cake flour. I needed to trim it to fit inside the bowl. 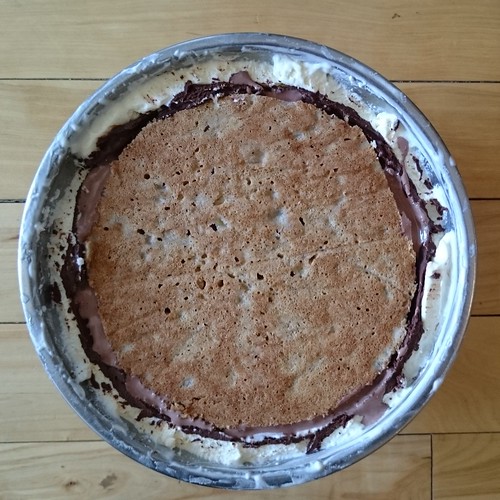 I cut the cake layer slightly too small, so I plugged the gaps using an icing syringe (yes, I own such a gadget) filled with softened chocolate ice cream. So that the bombe would sit flat on a serving platter, I trimmed away excess ice cream and ganache at the top of the bowl. 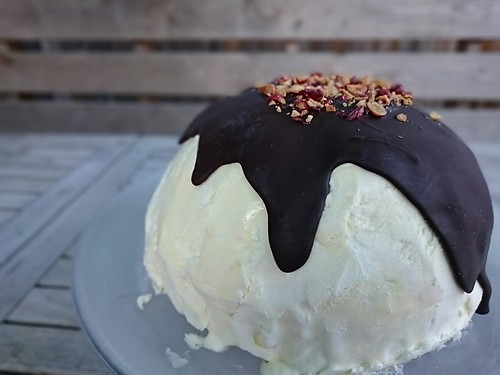 Here’s the finished bombe. To unmold it, I inverted the bombe onto a cake plate, then blasted the bowl’s exterior with a puny butane torch. It took almost 10 minutes before it fell out. To make the topping, I used 2T of cocoa butter melted in with the bittersweet chocolate as I didn’t have vegetable shortening. The topping sets quickly, so have your chopped peanuts (I used Ontario-grown Valencia) on hand to sprinkle on top. 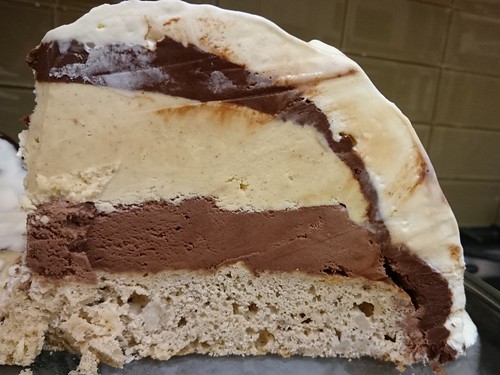 After a few days in the freezer, the bombe was very, very solid. I didn’t take it out early enough before serving, and it was rock hard. Even though we used a sharp chef’s knife dipped into hot water, we still needed a lot of elbow grease to cut slices for everyone. The chocolate topping layer was way too thick, as was the ganache layer. Next time, I would make both of these thinner, and allow for more time for the bombe to thaw. The problem is that the outside layer will get too soft, by the time the interior is soft. Increasing overrun (churning more air into the ice cream) might help also.

This dessert is very rich, and it easily can serve more than 16 people. By varying the ice creams and cake layers, it’s a basic template for an ice cream cake that looks great at the table.