There’s a first time for everything, and this past week, I baked my first few loaves of sourdough, using a starter I built up from scratch.

In the Bouchon Bakery book, the authors give a formula for a liquid levain, a high hydration starter. To encourage active development, the feeding schedule for the first four days is twice daily. I wasn’t very rigorous about the time or materials, and varied my usage of tap vs filtered water, and bread vs AP flour.

The book says you can start using it after six feedings. So on the fourth day, I tried using the levain in the multigrain bread recipe. Unfortunately, it turned out pretty poorly. The loaves didn’t ferment long enough, and were quite dense and not very sour. I didn’t have rye flour, and subbed in brown rice flour. Unfortunately, these loaves were duds and we ended up throwing them in the compost bin.

I continued feeding the starter but reduced the frequency to once daily, intending to make it less active and more sour. The second time I tried making the bread, the starter was about 8 days old. This time, the loaves turned out much lighter, with a stronger sour flavour. I took these to share with the office. 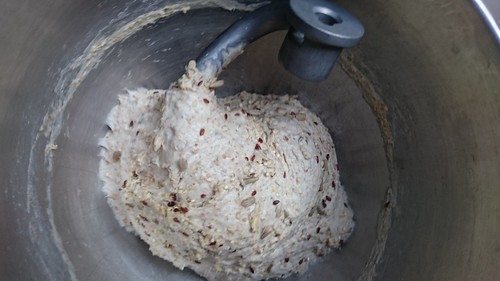 This week, I tried it once more, with a levain that was a full two weeks old. Above is the finished dough, this time, made with all the specified ingredients, but I did change up the soaker, swapping out half the sesame with cornmeal. The kneading time is a full twenty minutes (I used Speed 2 on a KitchenAid stand mixer), and the dough is well-developed and strong at this point. 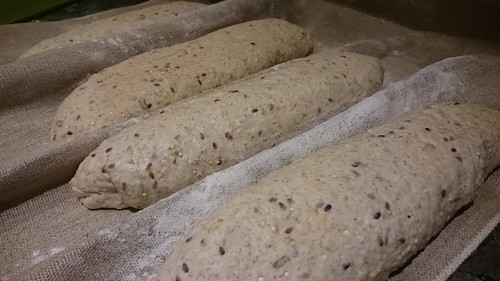 My new equipment, a linen couche and bread lame arrived from Breadtopia, just in time for these loaves. I shaped the batards and set them on the flour-dusted linen. After proofing, I slashed them with a single, long cut. The razor is very, very sharp and mounting it to a handle is certainly easier to use than holding a snap blade directly (which is what I was using before). 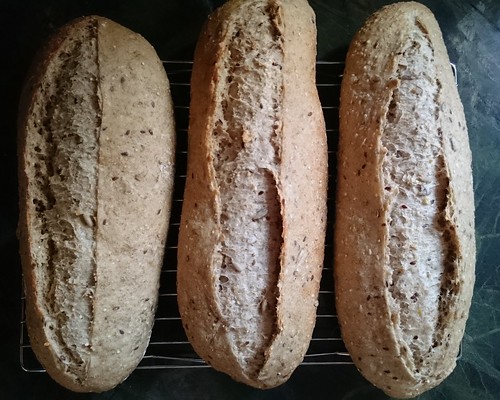 The top of the baked bread opened up nicely, and developed a grigne but didn’t get much colour. For steam generation, I used a preheated cast iron pan that I dumped boiling water into. I need to find my spray bottle to spritz the surface of the loaves as well as the oven walls. 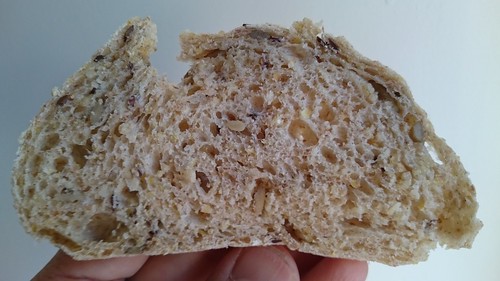 We were very pleased with this bread. It tasted wholesome, with a complex flavour. The next time I make this, I’ll try a few improvements, by using a more sour starter, and work on improving the the browning of the crust.