These past two weeks, I have been nurturing a sourdough starter using the directions in Bouchon Bakery. Using the liquid levain I’ve been feeding on a daily (sometimes twice-daily) basis, I made four loaves of walnut bread this week, perhaps the best bread I’ve ever made. I’ll write more about the sourdough starter in another post this week, so I can just focus on these amazing loaves. 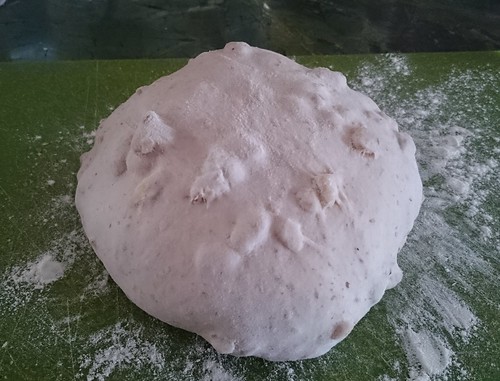 The dough contains a small amount of rye and whole wheat flours, but is otherwise a white flour bread. Using a modest amount of liquid levain, the only additional leavening is an eighth of a teaspoon of instant yeast. The kneading time is 20 minutes on low in the stand mixer (I used Speed 2 on my KitchenAid). At the end, I added untoasted walnuts. 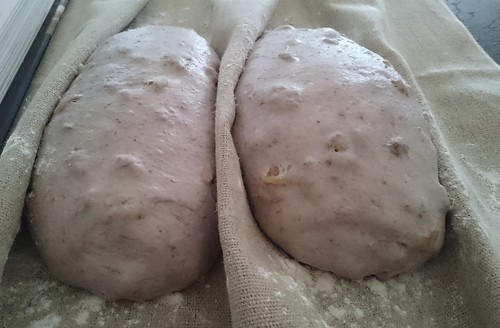 This is bread that you have to plan ahead for. For this walnut bread, there is a fermentation period of three hours in which you need to stretch and fold the dough every hour. After that, you let it proof for another three hours. The photo above was shot after this proofing period. 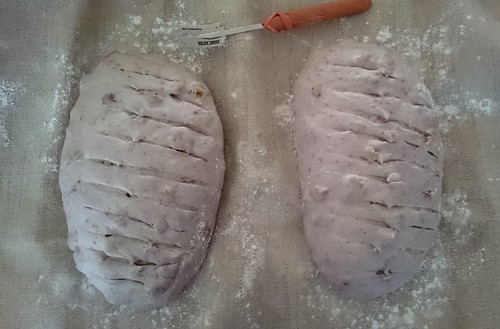 I bought a lame and linen couche from Breadtopia and used them to make this bread. As suggested in the recipe, I slit the loaves in a “sausage cut” just before baking. I wasn’t about to implement Bouchon’s rocks and chain method of generating steam, so I just put a cast iron pan in the oven, and poured boiling water into it after placing the bread on the stone. 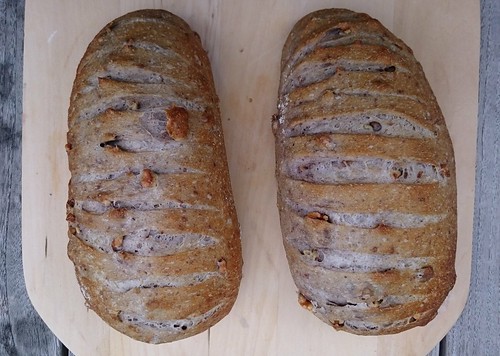 The finished loaves were nicely browned and grew to a nice size. I was quite pleased with the crisp crust. The interior was airy and soft, and every bite had walnuts. While the sourdough flavour was mild, it was definitely noticeable. 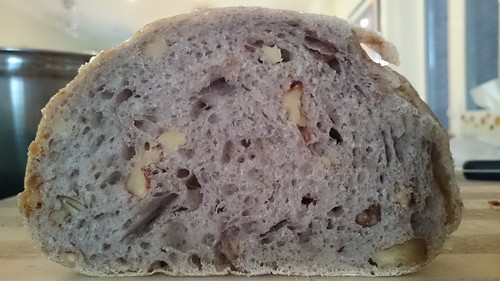 I mentioned at the beginning that I made four loaves of this bread. The two loaves I made on Monday were so good, that I made two more on Tuesday. We’ve been eating it non-stop: dipped in soup, slathered with jam, smeared with Brie, etc.