Next on the rhubarb checklist: the strawberry-rhubarb pie recipe in the May/June 2015 issue of Cook’s Illustrated magazine.

The goals of the CI recipe were to eliminate a runny filling and mushy texture, and preserve the bright fruit flavour. To this end, the rhubarb gets microwaved and macerated in sugar, and the exuded liquid used to make a jam with some of the strawberries. At this point, I put the filling in the fridge, intending to finish the pie the next day. 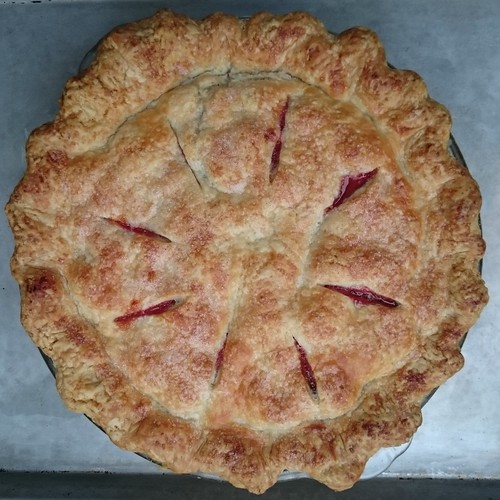 This pie, like all the recent pies in the magazine, uses their foolproof pie crust, which I’ve made dozens of times. After taking the chilled filling out of the fridge, I mixed in the instant tapioca, then poured it into the crust and baked the pie. 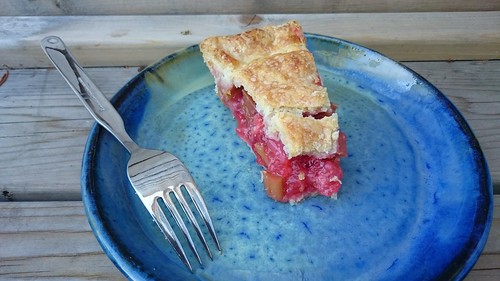 At the minimum baking time, none of the juices bubbled out of the slits, so I wasn’t sure whether this was good (less mess to clean up) or bad (too much thickener in the filling). But I needn’t have worried: a mere half hour of cooling outside, and we dug into perhaps the best pie I’ve ever made. The filling was unbelievably good: tart and sweet, without any spices to mask the pure fruit flavour. It was a little runny, but that’s to be expected for a pie straight out of the oven. Making the filling ahead of time also didn’t seem to negatively affect the pie.

Three adults and two small children finished this entire pie in less than 24 hours. I bought more rhubarb the next day to make another one!