In honour of Canada Day, I made a batch of maple walnut ice cream, a cool treat to enjoy on a warm day.

The recipe is from Serious Eats, and has two simple steps. First, finely chopped walnuts are steeped in hot milk and cream. Then, the strained liquid is used to make the custard base. 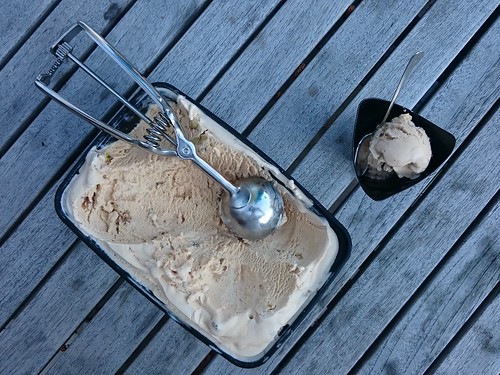 I deviated very slightly from the given recipe, using four egg yolks rather than six (I hate having to find uses for leftover egg whites), and using a medium dark maple syrup (Costco only sells one kind). This recipe calls for cooking the custard directly on the stove, but a recipe I’ve used in the past instructs you to bake the custard in a water bath. Whichever method you use, the idea is to cook the eggs gently until the mixture thickens.

Despite the walnut-infused cream, I found the maple flavour to be the dominant one. It’s plenty sweet, but could be nuttier (maybe by adding walnut oil?).