The recipe is not in the Milk Bar cookbook, but appears on their website. If you’re in New York, you can pay $95 and meet Tosi and assemble your own cake. Check out the slide show from Serious Eats’ visit to Milk Bar. But you can make it yourself, if you have perseverance, the proper equipment, and access to baking specialty ingredients. Which, I suppose, is a big if. 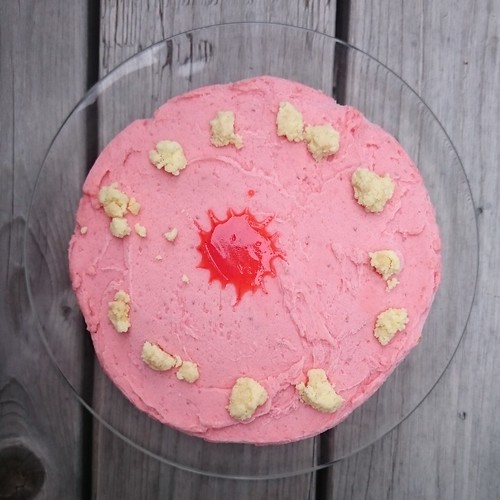 As I’ve done for previous Milk Bar layer cakes, I decided to double the quantities and end up with two cakes. Here’s the timeline.

I made the milk crumb, lemon curd, jam and vanilla cake. The first two components are ones that I’ve made from the book before. As I’ve done in the past, I cut back on both the sugar and butter in the curd.

For the vanilla sheet cake, I baked the double batch in a half sheet pan, with a full sheet pan below it to catch drips (it didn’t overflow though).

There were no local strawberries at the farmer’s market this weekend, so I used two packages from California. I had a box of Certo low-sugar pectin that was half-open, so I used that in this recipe, reducing the total sugar by about one-third. It set very softly, to a sauce-like consistency. I also couldn’t find sherry vinegar, so I just used more white wine vinegar, replacing a bit of it with crappy cooking sherry. I did have citric acid (aka sour salt) though, to boost the jam’s brightness and to cut through its sweetness. 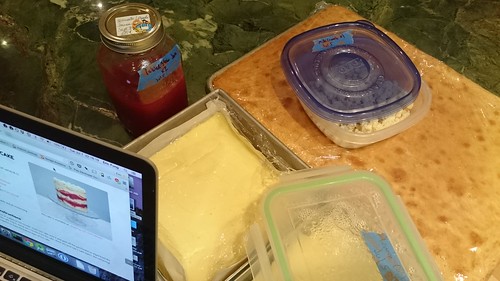 For the double batch of liquid cheesecake, I baked it in an 8×8” brownie pan lined with parchment. It took me 30 minutes at 300°F for it to be set but still jiggly in the centre.

With all the components made and chilled, it was time to combine a few of them together. 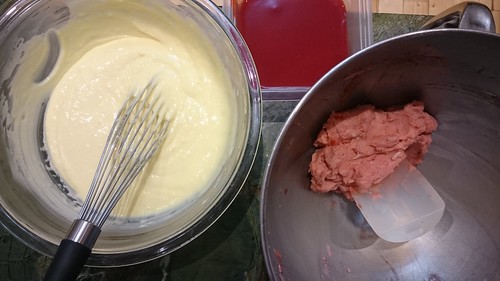 To make the lemon cheesecake, which requires a partial recipe of lemon curd, I whisked together 325g liquid cheesecake and 345g of lemon curd. It was surprisingly loose, but still spreadable. 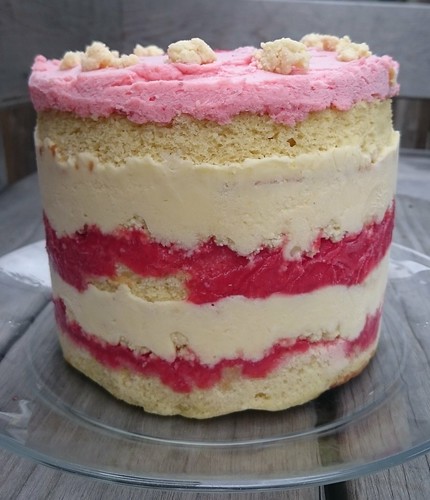 As I finished assembly at midnight on Wednesday, I didn’t bring the cake into work until Thursday, to give it a full 12 hours in the freezer. 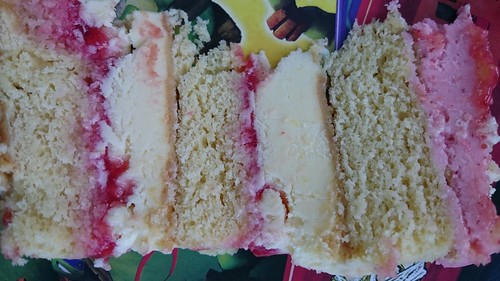 The cake has lots of strong flavours and textures, and is another winner. In the future, I would add some bits of fresh strawberry somewhere, just to give your mouth a break from all the richness. Do serve it quite cold (about three hours in the fridge after coming out of the freezer) so that it’s easier to slice.

Incidentally, I’ve been reading Salt Sugar Fat by Michael Moss. That’s a pretty good description of this cake (and everything else I’ve made from the Milk Bar cookbook).