For the Civic Holiday Monday, we were invited for dinner and wanted to bring something to go with a nice goat cheese spread we bought at a farmer’s market. I took the opportunity to make the ciabatta from the book I learned to bake bread from.

Peter Reinhart’s The Bread Bakers Apprentice is full of information, photos and recipes and I consider it an essential reference for bread. The ciabatta recipe employs a pre-ferment in the form of a poolish, a wet sponge. I made it at 23:00 on Sunday night, and had my brother-in-law put it in the fridge around 03:00.

The next morning, I combined the poolish with the rest of the ingredients. As the dough came together in the mixer, I knew it seemed a little dry. The recipe says it should clear the sides of the bowl but stick to the bottom, but mine cleared the bottom also. I dribbled in a few tablespoons of water, but the dough resisted becoming tacky. 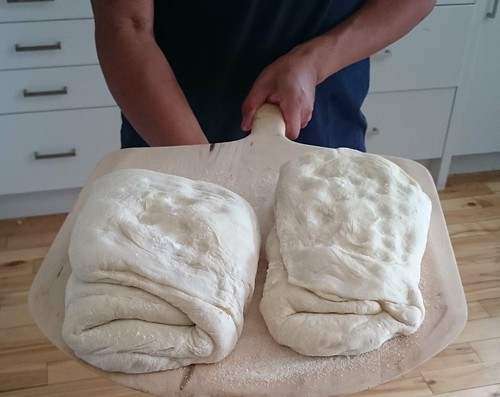 I proceeded to stretch and fold and rest, and after two hours, the dough was ready to shape and go into the oven. For dusting the peel, I used semolina flour. The loaves were a bit too plump, but as I tried to stretch them, they started to crack so I let it go. 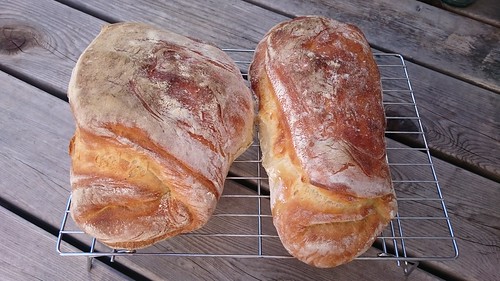 With a heavy brownie pan in the oven as my steam pan, I poured in a cup of boiling water, and did three rounds of spritzing. This “water dance” paid off, as it produced a beautiful, deeply browned, crisp crust. 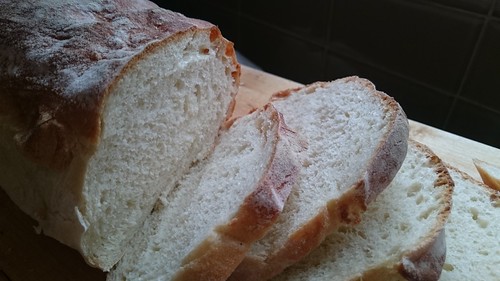 Eaten a few hours after it came out of the oven, the bread was delicious. Lots of chew at the edges, with a soft, tender crumb. You can see that I didn’t achieve those big, open holes that are a signature of properly made ciabatta. For example, my previous effort based on a Cook’s Illustrated recipe turned out beautifully. But I trust Reinhart’s recipe and advice, and will try it again in the future, adjusting the hydration level even higher.