I remember the success of last year’s corn ice cream, so when I saw this recipe for a corn, sour cream, and lime popsicle in a recent issue of the New York Times Magazine, I knew I had to try it.

The recipe is from an article by a Times’ columnist writing about Fany Gerson sharing her Mexican culture through food. I have a bit of a crush on Gerson, ever since watching a video about her donut shop. We were able to partake of both the donuts and paletas on our last trip to NYC. 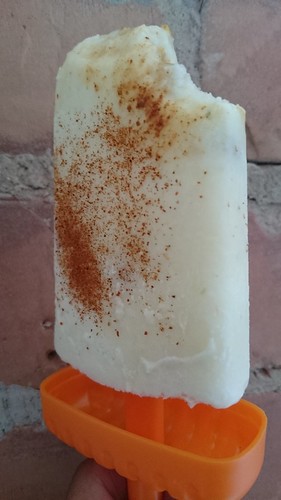 To make these paletas, I made half the given recipe, stripping the kernels off 4 small cobs to get 2 cups. Serranos aren’t readily available within walking distance of my house, so I settled on a whole jalapeño. After pureeing the corn mixture in a VitaMix, there was quite a bit of froth. Once the sour cream and lime juice and zest were added, I left it in the fridge to chill, while I sauteed the remaining kernels in some salt and butter. 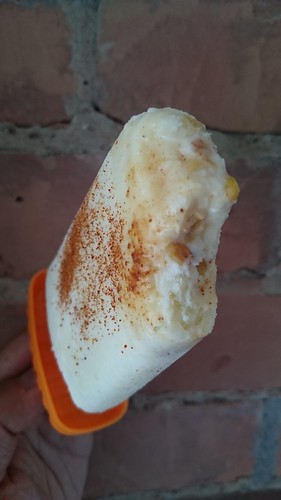 To freeze the pops, I spooned the chilled, sauteed kernels into the bottom of each mold. The butter made them stick together a bit but I did my best to separate the individual niblets. After letting the filled molds freeze for half an hour, I used the ice pop sticks to distribute the corn bits into the slush so they would be suspended evenly.

These paletas really taste like Mexican street corn, albeit colder and sweeter. The individual ingredients all combine to make an ice pop that’s like a savoury dessert. There’s a bit of textural interest too, since the roasted kernels come out kind of chewy. The corn we used wasn’t the corniest, unfortunately, so the base flavour isn’t very strong.

I would not use the jalapeño in the future, or let it simmer for so long: it left an unpleasant vegetal taste and was a bit too spicy. I’ve had better success in the past using a dried chili pepper, like an arbol or pequin.