Ever since reading that article about apricots in Lucky Peach, I always keep an eye (and nose and tongue) out for a sweet, juicy and fragrant apricot. This past week at the market, the apricots for sale were so good, that we promptly bought an entire 7L basket.

Besides just enjoying them raw, eaten over a sink, we decided to make some frozen treats. Our second project was to make an ice cream. This recipe that I found online calls for 4 pounds of apricot. It’s always a good sign when the most expensive ingredient (and the one in the title of the recipe) features prominently. 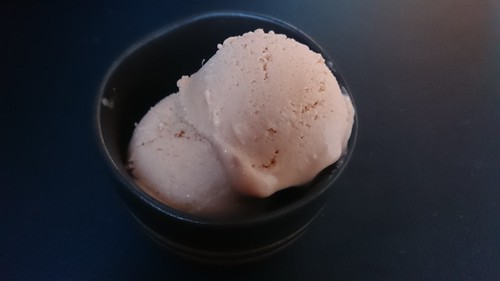 After peeling and pitting all the fruit in the morning, I let it macerate for much longer than one hour. This wasn’t intentional, but it was just how my day unfolded. By evening, when I got back to the ice cream, the mixture looked a bit darker, and a layer of liquid had floated to the top of the bowl.

The custard base is very light, as it’s only made with three egg yolks. Since my sweetened apricot chunks were refrigerator cold, I just combined the cooked cream mixture directly with the fruit and blitzed everything in the blender. 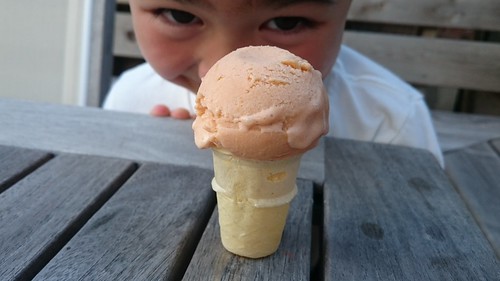 There has to be a typo on that website: my yield was more than two quarts, which is double what it claims in the recipe. Anyhow, the finished ice cream was alright. There’s some tanginess reminiscent of frozen yogurt, and the colour is a pleasing pastel, but it doesn’t capture the fragrance of a ripe apricot.

I am the kind of person that will turn down a scoop of gelato if it’s been made with artificial colour, and I feel similarly about artificial flavourings. But I wonder if that’s the only way to really deliver an apricot’s essence in a frozen dessert.