While shopping in Little India, we tried to buy a case of mangoes from one vendor, but were told that the season was mostly over. Fortunately, they did have incredibly fragrant guavas, and were able to procure mangoes from a nearby store. After a few days to let them ripen, we turned them into mind-boggling delicious ice pops. 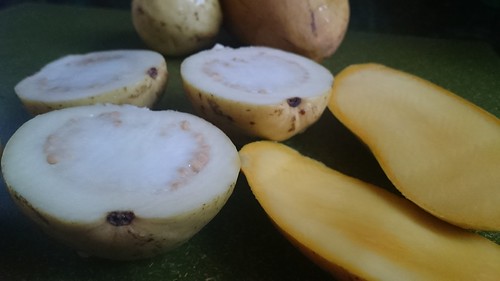 The Pakistani honey mangoes were indeed sweet as honey, and needed no further ripening, as the flesh was already a bit mushy. Even in the store, we smelled the guavas before we saw them. At home, their intoxicating fragrance announced their ripeness every time we walked nearby.

To make these popsicles, I pureed the flesh of both fruits (including the guava seeds) with the juice of two limes. For me, that much acidity was needed to balance the sweetness of the mango. I poured the thick puree into popsicle molds, then let it freeze without the sticks for about 20 minutes. 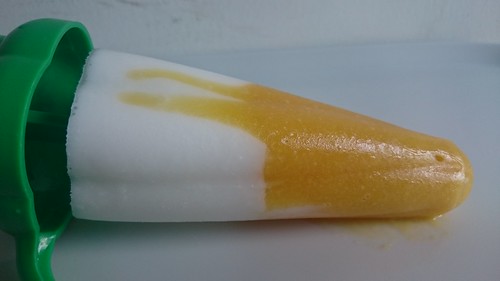 Next, I combined coconut milk with some coconut water and sugar, then poured that into the partially frozen molds. I used a chopstick to gently swirl the mixtures together.

These ice pops turned out pretty well, but there were a few things I would improve on: